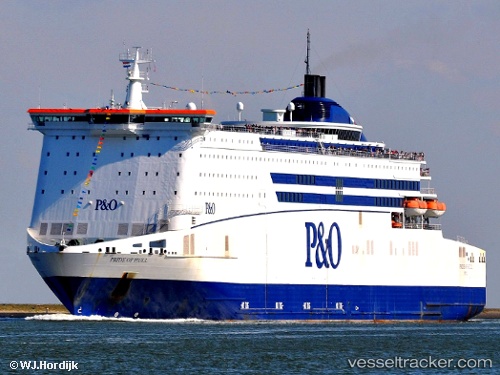 Ferry towed back to Hull

The 'Pride of Hull' was still anchored off Killingholme on Oct 21. The HM Coastguard had received a call from the Humber Vessel Traffic Service on Oct 20 just before 9 p.m., tating the ferry had lost power and smoke had been found in the engine room. She dropped anchor in the River Humber. On board were 264 passengers and cre. All of them were safe on board, and power remained on the decks. Two tugs were originally sent along with the Humber RNLI lifeboat. One tug remained with the vessel. The Associated British Ports (ABP) continued to liaise with and support the ship and will be assisting in her safe return to the Port of Hull as soon as possible. At 10 p.m. the tugs 'Svitzer Laura', 'Svitzer Stanford' and 'Svitzer Victory' were pulling the ferry back to the port. The ferry was alongside at the River Terminal 1 berth, King George Dock, Hull, at 10.35 p.m. where the cargo was discharged to another P&O ferry.

On Oct 20, 2020, a fire broke out in the engine room of the'Pride of Hull' in the Humber estuary. The ship, which has 264 passengers on board, had departed from Hull at 9.20 p.m. and was on its way to Rotterdam before reporting difficulties as it passed Immingham and lost power after smoke started billowing from the engine room. The Coastguard was alerted, and the Humber lifeboat has been deployed from Spurn Point. The tugs 'Svitzer Josephine' and 'Svitzer Laura' were also deployed to the ferry which was near North Killingholme Haven as of 11 p.m. On Oct 21 the ferry was still held on the Humber by the 'Svitzer Josephine'. The ferry was to be towed back to Hull when tidal conditions improved. Reports with photo and video: https://www.hulldailymail.co.uk/news/hull-east-yorkshire-news/live-fire-breaks-out-po-4625655 https://www.hulldailymail.co.uk/news/hull-east-yorkshire-news/pride-hull-fire-po-super-4625751

A total of 28 crew members of the 'Pride of Hull' have been told to self-isolate after a second crew member tested positive for the coronavirus hours before it was due to set sail again on Aug 13. It came just two days after transport union RMT said a crew member, from the UK but living in Spain, came down with symptoms on Aug 9 and subsequently tested positive. The crew member had been sent to quarantine in a hotel in Rotterdam, while three other UK seafarers were sent home from Hull to isolate. Six other overseas agency workers were also sent to isolate on the 'Pride of York' , which is laid up in Hull. But now a second case has been confirmed on board the ship, which was due to set sail from Hull to Rotterdam at 8.30 p.m. with a further 28 crew members also being told to leave the vessel to join the 'Pride of York', which is effectively being used as a hospital ship. The 'Pride of Hull' sailed at 8.30 p.m. with around 400 passengers and crew on board. The council’s public health team and Public Health England (PHE) were promptly informed of the situation and wree supporting P&O and the Hull and Goole Port Health Authority to understand and follow all available guidance. The situation was being closely managed and any risk to the wider public was considered very low.