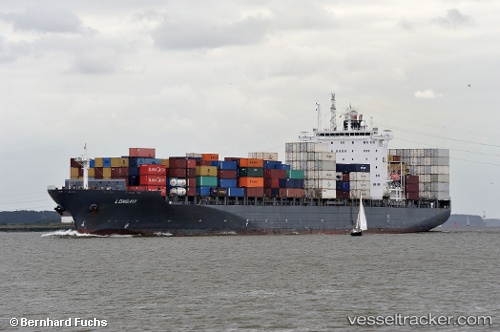 The Port of Montreal is extremely pleased to welcome Hapag-Lloyd’s Quebec Express on its inaugural call to Montreal. To mark the occasion, Sylvie Vachon, President and CEO of the Montreal Port Authority and Tony Boemi, Vice-President, Growth and Development, presented a painting to Captain Markus Droste, master of the Quebec Express, at a special ceremony held on Dec. 17. Hapag-Lloyd, the leading container shipping line by volume serving the Canadian market, has added the 4,045-TEU (20-foot equivalent unit) Quebec Express as the fourth vessel on its weekly St. Lawrence Coordinated Service 2 (AT2), which connects Montreal with Southampton, United Kingdom; Antwerp, Belgium; and Hamburg, Germany. The vessel arrived in Montreal on December 14 at Racine Terminal, operated by Montreal Gateway Terminals Partnership. Previously known as the Longavi, the vessel has been renamed for the Province of Quebec as part of Hapag-Lloyd’s tradition of naming ships after the markets it serves. http://www.hellenicshippingnews.com/port-of-montreal-welcomes-hapag-lloyds-quebec-express-on-its-first-call-to-montreal/