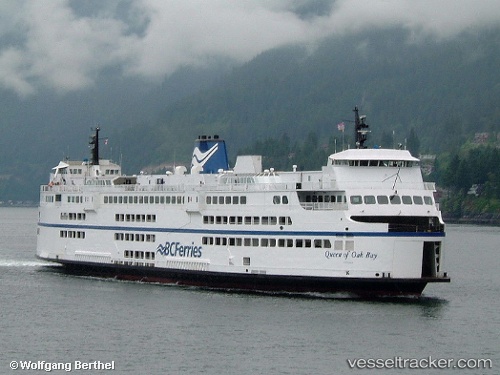 The Queen of Oak Bay returned to her regular route between Vancouver Island and the Lower Mainland on Jan 15, 2012, after being out of service slightly more than two days. Mechanical errors forced the vessel off her route late on Jan 12, resulting in eight cancelled sailings over two days on various routes. B.C. Ferries moved a ship from the Tsawwassen-Departure Bay route up to Horseshoe Bay to replace the ferry, causing other cancellations. Engineers found a blown cylinder in one of the vessel’s two main engines. B.C. Ferries crews were out on Jan 14 afternoon, doing test runs with inspectors from Transportation Canada. Sea trials lasted more than four hours. With the vessel running again, the "Coastal Renaissance" was returned to the Tsawwassen run.

Queen of Oak Bay out of service after engine breakdown

BC Ferries has been forced to cancel eight sailings on its three main routes between Vancouver, Victoria and Nanaimo on Friday because of a mechanical breakdown of the "Queen of Oak Bay" on Jan 12, 2012. The incident happened on the 5 p.m. sailing of the "Queen of Oak Bay" about 10 minutes before its scheduled arrival at the Horseshoe Bay terminal when one of four engines on the vessel broke down. The vessel came to an abrupt stop, fire alarms went off and smoke could be seen because of the engine failure. After engineers sorted out the problem, the captain managed to bring the vessel safely into Horseshoe Bay under the power of one engine. The vessel was taken out of service for repairs, forcing BC Ferries to reroute several vessels and cancel eight sailings on three routes on Jan 13.

A security incident involving a suspicious briefcase aboard the "Queen of Oak Bay" at Horseshoe Bay caused a delaye on Sep 14, 2010. In the morning staff became concerned about a briefcase left in the ferry's cafeteria while the ship was docked at the ferry terminal northwest of Vancouver. West Vancouver police and the RCMP investigated and found the briefcase contents posed no threat. Other ferries at the terminal continued operating normally during the security incident. The "Queen of Oak Bay", which runs several times a day between Horseshoe Bay and Nanaimo on Vancouver Island, was delayed for more than an hour while the incident was resolved.