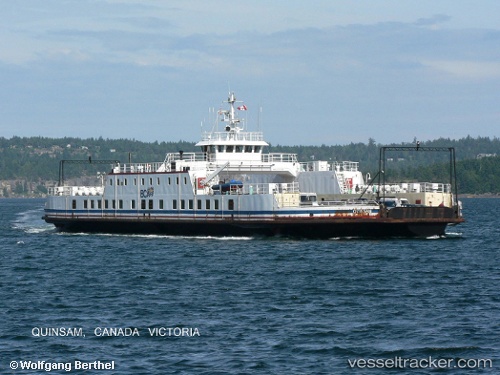 The search for a body in the water off the Gabriola Island is over. Divers on Mar 21 found a woman in the vehicle that smashed through a steel barrier at the ferry terminal and off the dock. The RCMP dive team with the assistance from the RCMP West Coast Marine patrol vessel "Hickett" and Canada Border Services Agency were able to enter the vehicle and recover the body at approximately 1 p.m. The victim was a 32 year woman old from Gabriola Island. As foul play is not suspected the case is now in the hands of the coroner. Dive teams were not retrieving the vehicle. The "Quinsam" meanwhile was back on schedule between downtown Nanaimo and Descanso Bay The incident had halted ferry service for most of the day as Coastguard, RCMP and search and rescue units combed the waters and shoreline looking for the car and any occupants. The car was discovered at a depth of about 37 metres about 60 metres off the stern of the "Quinsam". B.C. Ferries resumed sailings between Nanaimo and Gabriola at 5:30 p.m. on Mar 30, but sailings were timewise interrupted on Mar 21 due to dive and recovery operations in Descanso Bay. Report with photos: http://www.timescolonist.com/news/local/ferries-halted-as-rcmp-divers-search-for-body-of-person-who-launched-car-off-ferry-dock-into-water-1.94765

A RCMP dive team was unable to reach a sunken vehicle that broke through a barrier gate and drove off the docked "Quinsam" early on Mar 20, 2013. One person was in the vehicle. RCMP dive teams would not attempt any more dives in the area on Mar 20. The vehicle was travelling at an extremely high rate of speed and smashed through a six foot barrier gate at the Descanso Bay terminal. It then sped up and launched off the loading ramp and landed on the deck of the "Quinsam", which was tied up there. It drove along the length of the ferry and flew off the end of the car deck before plunging into the water, and it sank at around 3:45 a.m. The water where it went under is around 48 metres deep, and the RCMP dive team was not capable of going to that depth. A military or private dive team would have to be called in. At 6 a.m., BC Ferries cancelled all sailings between Gabriola Island and nearby Nanaimo Harbour until further notice. It arranged water taxi service for foot passengers. Before the ferry and loading ramp are put back into service, a full inspection was to be performed. The Gabriola RCMP, a Coast Guard hovercraft, firefighters and BC Ambulance Services were at the terminal assessing the situation. The West Coast Marine Services meanwhile did a depth scan and found the car. The beach was patrolled to see if anybody from the car could be located. Divers were on scene on Mar 21 at 8:30 in the morning to start the search for the vehicle. Ferry service was meanwhile resumed. The damage to the ferry was minimal. Some hydraulic lines to the ferry’s apron were damaged, but the crew would be able to operate it manually until the lines could be fixed. Reports with potos and video: http://www.cbc.ca/news/canada/british-columbia/story/2013/03/20/bc-gabriola-island-ferry-vehicle-sinks.html?cmp=rss http://beaconnews.ca/blog/2013/03/bc-ferries-dock-at-gabriola-island-damaged-after-car-plunges-into-water/

Four passengers on the "Quinsam" suffered minor injuries on Jan 27, 2012, after the vessel made a hard landing at the Descanso Bay Gabriola ferry terminal. The "Quinsam" was travelling at a speed of only about one knot before it hit the terminal. The collision, which occurred at about noon, also caused some damage to the braces of the pontoons at the terminal. Maintenance crews repaired the damage on Jan 28. No delays were caused as a result of the incident. B.C. Ferries is investigating the cause of the incident.