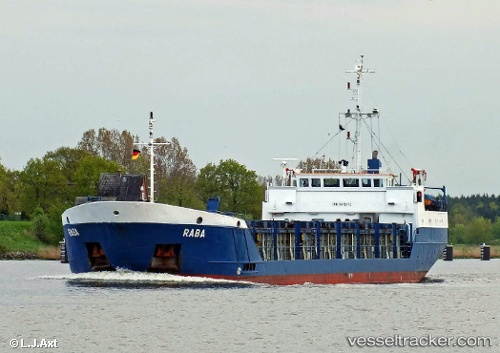 Officials of the water police in Brunsbüttel controlled the 'Raba' during the lock stay in Brunsbüttel after the westbound transit of the Kiel Canal while enroute from Gdynia to Bremerhaven on Feb 15, 2020, at 8.30 a.m. and found some violations. They checked the ship for compliance with the Ballast Water Convention and noticed that, for months, none of the transactions in the ballast water diary contained the minimum information required by the Federal Maritime and Hydrography Agency. As a result, the ballast water operations performed in the past were not understandable. The police officers initiated an administrative offense procedure against the captain and his first officer in several cases due to incorrect or unspecified entries and collected a security deposit of 378.50 Euros each on site. At 9.15 a.m. the ship continued on its way and berthed in Bremerhaven at 5.30 p.m.

Investigations agains both captains after collision

The investigation into the collision of the "Raba" and the "World Bora" off Rügen were still going on. The police was investigating agains the masters of both ships for endangering ship traffic. It was found untypical that the ships hit with such high speed which also caused the high number of injured of 15 - nine being employees of Siemens Gamesa, two employees of Iberdrola, bound to the wind park Wikinger off Arkona and a crew of four, all of whom were thrown around on the decks and inside the wheelhouse of the "World Bora" which was sailing at a speed of 18 knots, the "Raba" with eight knots. Five were still in hospital on Feb 20, the others were released or had already been treated on site once the ship was in port. Among the injured were two Danish nationals and two Filipinos, one each from Spain, Lituhuania and Romania and the others of German nationality. The "Raba" left the port of Mukran on Feb 22 at 6 p.m. and headed to Szczecin, where it arrived on Feb 23 at 4.30 a.m. She left the yard again on March 21 at noon and headed to Fakse Ladeplads via Kapplshamn, where she arrived on March 25 at 6.15 a.m. to take cargo for Apenrade. German reports with photos and video: http://www.ostsee-zeitung.de/Vorpommern/Ruegen/Kollision-vor-Ruegen-Hohe-Geschwindigkeit-der-Schiffe-untypisch http://www.spiegel.de/panorama/ruegen-schiffsunfall-ermittlungen-gegen-kapitaene-eingeleitet-a-1254188.html

On Feb 19, 2019, between 7.30 and 8 a.m. the Danish supply ship "World Bora" sailing on northeastern course was in collision with the m/v "Raba" which was underway in ballast condition in southeastern direction 2,5 miles east of Stubbenkammer off Rügen island. All 15 persons aboard the supply ship which had on board 11 wind turbine technicians - nine being employees of Siemens Gamesa, two employees of Iberdrola - bound to the wind park Wikinger off Arkona and a crew of four on board were injured, 10 of them severely. A helicopter was deployed to the scene and transported one of them to hospital. The "World Bora" suffered severe damage at the port side bow from which the shelter was partially torn off completely, but was able to reach the ferry port of Sassnitz-Mukran short time later. The crew of the DGzRS lifeboat "Harro Koebke" started immediately the medical first aid. Not long after, emergency doctors and paramedics arrived. The fire brigade Sassnitz was ordered to take off two seriously injured from the bridge of the vessel with an aerial ladder. One of the injured was trapped and had to be cut free inside the wheelhouse first. Four of the injured were transported by helicopters of the DRF Air Rescue and ambulances for medical follow-up to hospitals and medical practices. Also the "Raba" which had sailed from the port of Køge on Feb 18 at 8.50 p.m., bound to Szczecin, ETA Feb 19, 4 p.m., headed to the port of Mukran and moored at berth 6 at 11 a.m. She had suffered damage at starboard side where the bulwark was pushed inside and torn open when the "World Bora" hit it with at least 18 knots. Visibility on scene was reduced with slight rain in the area. The German Ship Accident Investigation Commission sent a team from Hamburg which started its work in collaboration with the colleagues in Denmark and Poland. German reports with photos and video: https://www.presseportal.de/blaulicht/pm/108749/4197289 https://www.uckermarkkurier.de/mecklenburg-vorpommern/zwei-schiffe-vor-ruegen-zusammengestossen-1934613502.html https://www.ndr.de/nachrichten/mecklenburg-vorpommern/Mehrere-Verletzte-bei-Schiffskollision-vor-Ruegen,schiffskollision228.html http://www.ostsee-zeitung.de/Vorpommern/Ruegen/Schwerer-Schiffs-Unfall-vor-Ruegens-Kueste