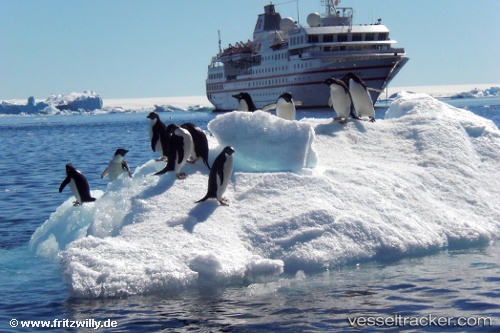 Video of the collision

..has been published: https://twitter.com/i/status/1246520629760843780 The video is severely clipped and - based on the video - it is not possible to assess the course of events. The cruise ship owner, Columbia Cruise Services, alleges that the 'RCGS Resolute' - which did not have passengers on board - was attacked by the patrol vessel because it refused to follow an order to follow immediately to a Venezuelan port. The incident took place in international waters approx. 13 miles off the Venezuelan island of Tortuga.

Statement of One Ocean Expeditions regarding accident

The owner of the 'RCGS Resolute' issuied the following statement regarding the collision with the 'Naiguatá': In the early morning hours of March 30, 2020 (local time), the cruise vessel RCGS RESOLUTE has been subject to an act of aggression by the Venezuelan Navy in international waters, around 13.3 nautical miles from Isla de Tortuga with 32 crew member and no passengers on board. When the event occurred, the cruise vessel RCGS RESOLUTE has already been drifting for one day off the coast of the island to conduct some routine engine maintenance on its idle voyage to its destination, Willemstad/ Curaçao. As maintenance was being performed on the starboard main engine, the port main engine was kept on standby to maintain a safe distance from the island at any time. Shortly after mid-night, the cruise vessel was approached by an armed Venezuelan navy vessel, which via radio questioning the intentions of the RCGS RESOLUTE’s presence and gave the order to follow to Puerto Moreno on Isla De Margarita. As the RCGS RESOLUTE was sailing in international waters at that time, the Master wanted to reconfirm this particular request resulting into a serious deviation from the scheduled vessel’s route with the company DPA. While the Master was in contact with the head office, gun shots were fired and, shortly thereafter, the navy vessel approached the starboard side at speed with an angle of 135° and purposely collided with the RCGS RESOLUTE. The navy vessel continued to ram the starboard bow in an apparent attempt to turn the ship’s head towards Venezuelan territorial waters. While the RCGS RESOLUTE sustained minor damages, not affecting vessel’s seaworthiness, it occurs that the navy vessel suffered severe damages while making contact with the ice-strengthened bulbous bow of the ice-class expedition cruise vessel RCGS RESOLUTE and started to take water. Ready to support anytime, the RCGS RESOLUTE remained for over one hour in vicinity of the scene and reached out to the Maritime Rescue Coordination Centre (MRCC) Curaçao. This is an international body which oversees any maritime emergencies. All attempts to contact those on board the navy ship have been left unanswered. Only after receiving the order to resume passage full ahead by the MRCC and that further assistance is not required, the RCGS RESOLUTE, currently safely moored in the port of Willemstad, continued sailing towards her destination at Curaçao. A full investigation into the circumstances surrounding the incident will now be carried out. More: https://twitter.com/Simon85205764/status/1245420937866067969 https://www.bbc.com/news/world-latin-america-52151951

On March 30, 2020, at 12.45 a.m. the Venezuelan flagged Coast Guard vessel “Naiguatá - GC 23”, 1500 dwt, capsized and sank in the Caribbean Sea after a collision with the RCGS 'Resolute'. It was on patrol tasks seven miles northwest of La Tortuga island. The Venezuelan vessel had ordered the cruise ship, which sailed in Venezuelan territorial waters, to set sail for Isla Margarita which is located east of the island of La Tortuga. The 'RCGS Resolute' probably came from the east and should therefore turn around. According to the Venezuelan authorities, the ships collided when the 'Naiguatá' escorted the cruise ship to the said port. The 44 crew members of the patrol ship were rescued by the 'T-91 - Los Frailes' and were taken to the main station of the Coast Guard of La Guaira, Vargas. Their ship sank on a water deph of about 70 meters. The 'RCGS Resolute', enroute from Buenos Aires without passengers, headed to the port of Willemstad, Curaçao, where it docked in the morning of March 31 with some bow damage at the Motetwerf in Sint Anna Bay. Venezuela has indicated that there will be an investigation and a lawsuit. It was unclear why the Venezuelan authorities initially wanted to detain the ship which sailed in territorial waters and according to the law of the sea had the right of free passage as long as they comply with the regulations that the country has laid down, such as the prohibition of discharging oil or fishing without a license. Reports with photos: https://curacao.nu/marineschip-venezuela-gezonken-cruiseboot-vaart-door-naar-curacao/ https://www.infodefensa.com/latam/2020/04/01/noticia-resolute-resistio-registro-naiguata-asistio-buque-impacto.html https://www.conelmazodando.com.ve/asi-quedo-barco-pirata-portugues-que-hundio-buque-venezolano https://twitter.com/ConflictsW/status/1245076319924338700