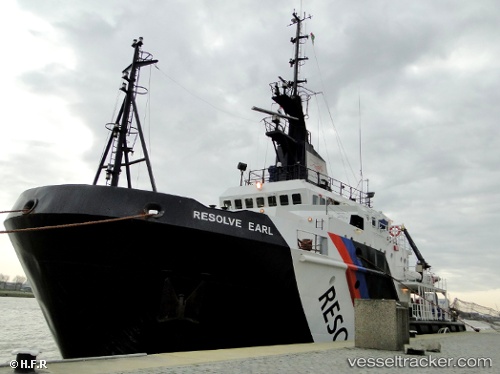 The "Resolve Earl" was being recycled in Mobile in October 2018.

The MV Blizzard (138 to BP) will tow the Costa Concordia along with the MV Resolve Earl to the port of Genoa, where the cruise ship will eventually be scrapped. The MV Resolve Earl, another AHTS, has been on scene over the course of this week’s refloating operation. The Costa Concordia is currently held in position thanks to two other tugs, Garibaldo and Red Wolf on the east, which were both involved in the refloat.

Scotland’s coastline is currently without emergency coastguard tugboat cover while desperate efforts are made to put a temporary contract in place. It is understood it could take days to sort out a last minute reprieve announced on Oct 1, 2011, night to keep two safety tugs in the north until the end of December. The last vessel on station was the "Anglian Earl" which stopped her patrol duties and left the area on Oct 1 morning. She was diverted to anchor off Wick at lunchtime while the UK government tried and thrash out the legal complexities of an interim deal. A second vessel, the "Anglian Sovereign", is undergoing a refit in Aberdeen harbour. If an arrangement cannot be made with present tug operaters JP Knight, the government may charter two similar vessels from other ship owners. This, combined with the closure of the Forth and Clyde coastguard stations and the downgrading of the Aberdeen station, raises serious questions about maritime safety in Scotland. The UK Government plans to close eight coastguard stations, including two in Scotland. Although the Aberdeen centre itself will be retained under the proposals, the number of staff would be reduced. The Scottish Secretary Michael Moore and Chief Secretary to the Treasury Danny Alexander were in talks with the UK Government about continuing the funding of the tugs, which operate in the Western Isles and Shetland and go to the aid of ships who get into difficulties in Scottish waters.