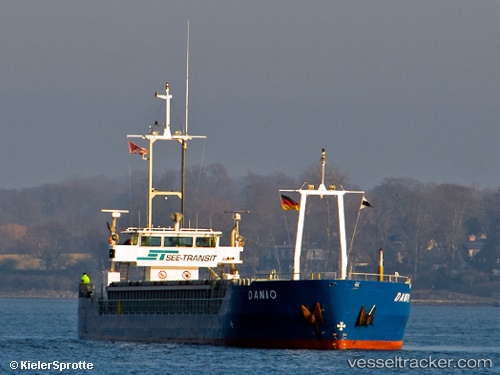 The operator ofthe "Danio" which sailed across the North Sea with an alarm system switched off and the entire crew asleep for 90 minutes before it crashed into a wildlife haven has been fined £60,000. No-one was awake on the bridge when the "Danio" ran aground on the Farne Islands, off the Northumberland coast, despite the Longstone Lighthouse's warning beams flashing across the sea. The vessel set out from Perth, Scotland, on the evening of Mar 15, 2013, with a cargo of logs destined for Ghent. At around 3 a.m. the following day, the Chief Officer, who was in charge, fell asleep on a settee on the bridge after putting in eye-drops he needed for an infection. There was no look-out among the six crew. An alarm which sounded a warning if the bridge was not manned had been switched off because the crew found it irritating. They woke up 90 minutes later with the noise of the vessel running aground on rocks. It hit a reef head-on, then pivoted 180 degrees, getting stuck fast on the outcrop. No-one on board was injured and there was no leakage from the vessel, despite it being badly damaged. The "Danio" was only removed 12 days later following a tricky salvage operation. The Newcastle Crown Court on Mar 27, 2014, judged there was a lack of effective management, which allowed the situation to come about. The defendant, Cuxship Management, was findes £60,000 after the firm admitted two breaches of maritime regulations. The court also ordered it to pay £12,796 prosecution costs. Christopher Knox, defending, said the operator has instructed that the bridge alarm must not be turned off in future, and that measures were now in place to make sure all crews employed are correctly qualified.

Operator of Danio pleaded guilty in breaches of safety regulations

The operator of the "Danio" which grounded on the Farne Islands in March 2013 on Jan 27, 2014, has pleaded guilty to two breaches of shipping safety regulations. Carrying 1,500 tonnes of timber on its way from Dundee to Antwerp, the "Danio" ran into the islands in March when its lookout fell asleep and was stuck for almost two weeks. Solicitor Tony Cornberg entered guilty pleas on behalf of Cuxship Management GMBH, of Cuxhaven in Germany, at Mid and South East Northumberland Magistrates’ Court to charges of failing to maintain a proper look-out and failing to meet the requirements regarding the safety-management system. The case was to be dealt with at Newcastle Crown Court after magistrates decided that their powers of sentencing were insufficient. The case was adjourned to March 3 for sentencing.

Video: How the Danio cargo ship went aground by lighthouse

Inside Out looks at how a modern cargo ship ploughed into the Farne Islands right next to an operational lighthouse. The MV Danio got caught on rocks on the Farne Islands off the Northumberland coast on 16 March, 2013. Investigators looking into what caused the cargo ship to run aground have discovered a member of crew on watch "fell asleep". Owner of the vessel, Frank Dahl, said the incident was down to "human" error. http://www.bbc.co.uk/news/uk-england-23928655