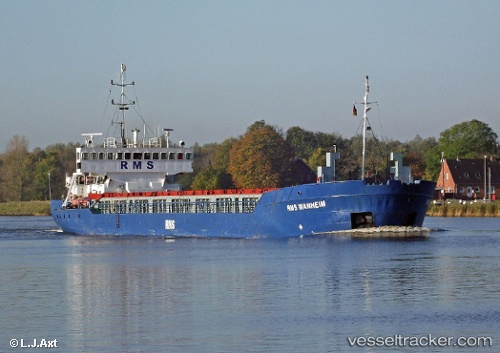 In the morning of March 16, 2020, the 'RMS Wanheim', loaded with 2,345 tonnes of steel, informed the CROSS Corsen that it had suffered a propulsion damage 14 nautical miles west of the island of Sein enroute from Rotterdam to Pasajes. On order of the Maritime Prefect of the Atlantic, the emegenvy tug 'Abeille Bourbon' was sent to the ship to monitor its drift. At 10:45 a.m., the Maritime Prefect of the Atlantic gave notice to the shipowner to take all necessary measures to put an end to the danger posed by the 'RMS Wanheim' to navigation and the environment. In the evening hours the 'RMS Wanheim' was still disabled, and its owner signed a private contract with the 'Abeilles Bourbon' to tow it to the port of Brest. The towing connection was established at 9:39 p.m. The convoy arrived off Brest on March 17 in the morning, where the tug 'Saint Denis' (IMO: 8617342) took over the further assistance. At 10.40 a.m. the ship dropped anchor in pos. 48° 21.09' N 004° 28.96' W. The vessel left the anchorage of Brest on March 20 and resumed the voyage to Pasajes with an ETA as of March 22, 6 p.m.

On March 18, 2018, at 10.10 p.m. the captain of the "RMS Wanheim" was arrested by the Humberside Police for being drunk and for assaulting a member of his crew. Officers on scene reported all the crew members being drunk and fighting. A replacement captain arrived on March to take over the vessel which was alongside at King George Dock at Hull. On March 20 at 7 a.m. it left port, bound to Gunness.

The fire aboard the "RMS Wanheim" broke out during welding works about the ship in the afternoon of Feb 13 at the Emder Werft und Dockbetriebe GmbH. Wood and plastic caught fire. 55 fire fighters were on Scene to tackle the blaze which was soon brought under control. They were able to protect a tank with 40 cbm diesel fuel. Small amounts of oul leaked into the harbour basin. German report with photo: http://www.oz-online.de/-news/artikel/120576/Schweissarbeiten-loesten-Feuer-im-Hafen-aus