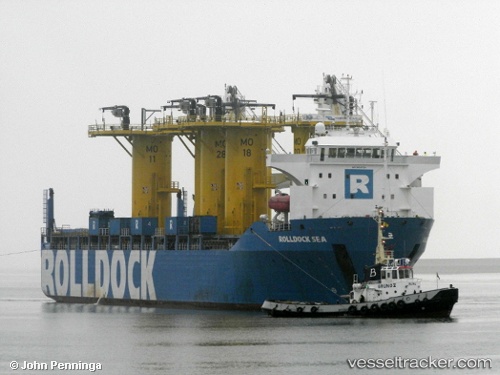 The "Rolldock Sea" has turned towards Bermuda after a crewman began to suffer respiratory issues. The crew contacted the Bermuda Maritime Operations Centre on Jan 21, 2019, shortly after 10 p.m. last night to say it was steering towards the island because a 39-year-old Filipino national needed medical evacuation. The ship, which was en route from Port Everglades to Den Helder was expected to meet the pilot boat "St David" on Jan 22 at 1.30 p.m. for the crewman to be transferred to King Edward VII Memorial Hospital.

Enroute from Cuxhaven to Sassnitz the "Rolldock Sea" encountered rudder trouble short after leaving the locks of the Kiel Canal in Brunsbüttel for the eastbound transit of the waterway on Aug 8, 2018, at 9.35 p.m. The ship was ordered to berth at the navy pilings at the south shore in the canal port of Brunsbüttel for troubleshooting and moored at 10.03 p.m. It sailed again on Aug 10 at 8.30 a.m. with an ETA at Sassanitz as of Aug 11 at 1 p.m. now.

Logistics firm Europe Cargo has transported a river cruise vessel from Constanta Port in Romania to the port of Antwerp. The Rousse weighs 1,400 tonnes and was transported aboard the semi-sumergible vessel Rolldock Sea. The Rousse measured 113 meters long, 16 meters wide and 2 meters high. “The river cruise vessel will be used by its owners, Rederij Le Formidable, for party trips from Antwerp Port to Amsterdam Port, including city trips and hotel stayovers,” said Sanne Denessen of Europe Cargo. Europe Cargo is a member of the Project Cargo Network, which recently announced the launch of a new bonus ‘Load Outs’ module for its eLearning Platform pcntraining.com. The new module covers roll-on, roll-off operations and guidance on stability and ballasting for a barge during a ro-ro operation.