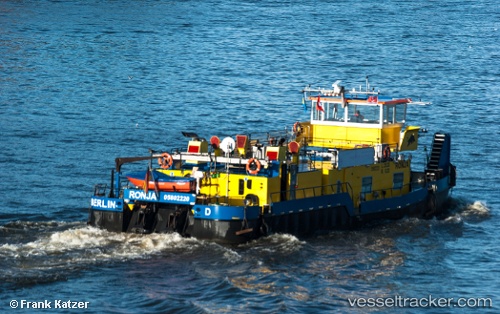 On Nov 16, 2017, at 2 a.m. the Castor transport from the decommissioned nuclear power plant Obrigheim started the voyage to Neckarwestheim with an expected arrival in the afternoon. The ship passed the lock Haßermsheim at 4.45 a.m. and had reached the lock atBad Friedrichshall-Kochendorf at 7.40 a.m. It was the fourth of five transports of nuclea waste to the intermediate storage in Neckarwestheim where nine castor containers have already been stored with three more being actually underway. In Sontheim anti nuclear activists tried to stop the transport with barrels and swimmers in the water who were removed by the police. Around the midday the voyage could be finished under strong presence of security forces on the shore, the water and in the air. Reports with photos and video: http://www.stimme.de/heilbronn/nachrichten/region/Castortransport-Protestaktion-in-Heilbronn;art140897,3940833 https://www.swr.de/swraktuell/bw/heilbronn/atommuell-schiff-gestartet-castor-transport-auf-dem-neckar/-/id=1562/did=20624440/nid=1562/1cyu1vy/index.html https://www.merkur.de/politik/spezialschiff-mit-atommuell-auf-neckar-unterwegs-zr-9367160.html

On Nov 15, 2017, the barge pushed by the "Ronja" was to be loaded with nuclea waste at the atomar power plant in Obrigheim for the transport to an intermediate storage in Neckarwestheim near Heilbronn. On Nov 14 the ships had sailed from Neckarwestheim across the Neckar to Obrigheim. German report with photo: https://www.rnz.de/nachrichten/mosbach_artikel,-castor-auf-dem-neckar-am-donnerstag-koennte-das-schiff-mit-atommuell-ablegen-_arid,316401.html

Protests against transport of nuclear waste

The "Ronja" pushing a barge carrying three Containers with nuclear waste set sail on Oct 11, 2017, at 5.35 a.m. from the decommissioned nuclear power plant Obrigheim towards the nuclear power plant Neckarwestheim, accompanied by protests of anti-nuclear-activists which awaited the Transport at the Gundelsheim lock at the Neckar. Swimmers went into the river, but were recovered by the Police which sheltered the Castor Transport on the 50-km-route with boats, a helicopter and shore based forces. German reports with photos: https://www.swr.de/swraktuell/bw/heilbronn/castor-transport-auf-dem-neckar/-/id=1562/did=20420122/nid=1562/1bwl0fb/index.html http://www.deutschlandfunk.de/atommuell-schiff-mit-castor-behaeltern-in-neckarwestheim.1939.de.html?drn:news_id=802479 http://www.faz.net/aktuell/wirtschaft/atommuell-erreicht-mit-schiff-zwischenlager-am-neckar-15240998.html