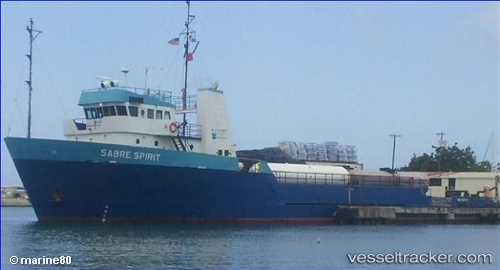 US Coast Guard investigates the grounding of "Sabre Spirit"

The U.S. Coast Guard is investigating the grounding of the Sabre Spirit, a 190-foot Panamanian flag roll-on/roll-off cargo ship, after the vessel ran aground Friday morning off Current Cut, between the islands of Saint Thomas and Great Saint James, U.S. Virgin Islands, and was refloated afterwards with the rising tide. There is no sign of oil pollution leaking from the vessel and the vessel does not present a threat to the environment at this time, according to the Coast Guard. The Sabre Spirit was transiting from Tortola, British Virgin Islands to Charlotte Amalie, Saint Thomas with a 12-man crew; no injuries were reported. Coast Guard marine casualty investigators are investigating the cause of the grounding and future enforcement actions for the Sabre Spirit are currently being evaluated. “The cause of the grounding is under investigation,” said Capt. Drew W. Pearson, Coast Guard Sector San Juan commander. “The close interagency coordination and response from Sea Tow and the Coast Guard averted an environmental tragedy in U.S. Virgin Island waters.” Coast Guard Sector San Juan received initial notification of the incident from the Sabre Spirit at approximately 10 a.m. Friday reporting that the vessel had run aground. Shortly thereafter, the Sabre Spirit notified that the vessel had been refloated and was taking on water.

The "Sabre Spirit" ran aground in the morning of July 11, 2014, off Current Cut, between the islands of Saint Thomas and Great Saint James, U.S. Virgin Islands, and was refloated afterwards with the rising tide. There was water ingress after refloating, patched up with the help of USCG. The vessel was escorted to Crown Bay and berthed there for damage assessment. No leak reported, the cause of grounding was under investigation.