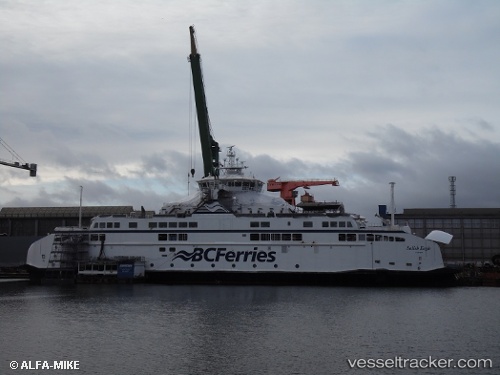 New BC ferry arrived in Victoria after voyage of more than 10.000 miles

A journey that has stretched more than 10,000 nautical miles from Poland to British Columbia ended in Victoria on March 20 with the arrival of the "Salish Eagle", the second of three new BC ferries. The ship docked at Ogden Point in Victoria, 38 days after leaving the Polish shipyard for the journey across the Atlantic Ocean and through the Panama Canal to B.C. The sister ship, the "Salish Orca", was already in B.C. and was slated to begin work on the Comox-Powell River route in April, while the "Salish Eagle" will enter service on the southern Gulf Islands route by the end of June. The two vessels, and the "Salish Raven", which is still under construction in Poland, can run on either LNG or diesel, which BC Ferries says will provide both financial and environmental benefits. Report with photo: http://vancouverisland.ctvnews.ca/bc-ferries-new-salish-eagle-vessel-docks-at-ogden-point-1.3332683