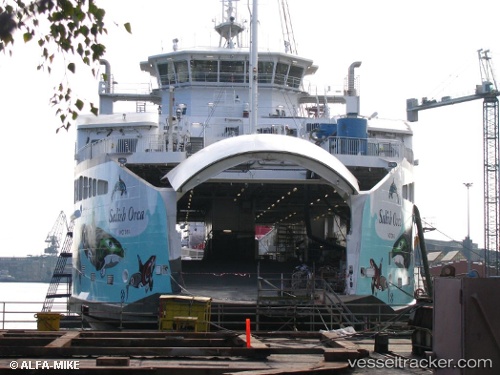 Ferry sidelined in Comox due to compressor trouble

Operational issues overshadowed the first week of sailings for the "Salish Orca". On May 22 ferry customers at Little River and Westview terminals faced lengthy delays as the ship’s computer controls stopped communicating with its propulsion system. Forced to call in electrical experts to correct the problem, BC Ferries saw the ferry, less than one week into service, experience more than four hours of delay on the Victoria Day holiday, said manager of public affairs Deborah Marshall. BC Ferries launched its newest ferry on May 16, with its inaugural sailing from Comox to Powell River. The new duel-fuel ferry replaced the 52-year-old Queen of Burnaby, which is now retired. Loading the new vessel in Comox for its first run took longer than scheduled. By the time the "Salish Orca" left Little River Terminal, it was already running about 20 minutes late, which was further compounded upon arrival at Westview Terminal. The first run from Westview departed 46 minutes late.

The Salish Orca has finally made it to BC waters after a 50 day voyage from Poland. She is now in Richmond undergoing some final changes before heading north to service the Comox-Powell River route. “We do plan to have this vessel in service by the spring and prior to that we will take her up to the Comox, Powell River area so we’ll have some public open houses so the customers an have a chance to touch and feel the new vessel” said BC Ferries Executive Director of Public Affairs Deborah Marshall. The Salish Orca will replace the 52 year-old Queen of Burnaby, a vessel that has been beset by mechanical problems resulting in numerous delays and sailing cancelations over the last few years. Report with video at http://www.cheknews.ca/newest-ferry-salish-orca-arrives-bc-255769/