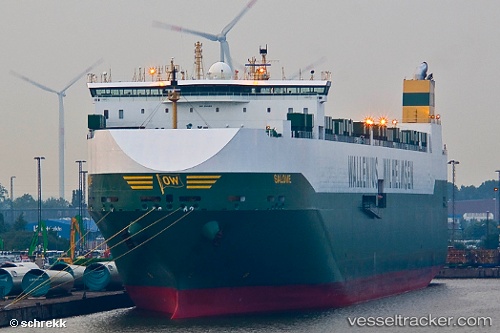 On Oct 28, 2020, at 11.25 a.m. the police was called after stowaways were located in Dock Gate 4 in Southampton. A group of 11 Albanian stowaways including a pregnant woman and a 17-year-old boy have been discovered on the 'Salome'. They have now detained for alleged immigration offences, with the woman taken to hospital relating to her pregnancy and a 17-year-old boy due to be transferred into the care of children's services.The ship had arrived at Southampton Docks at 7.30 a.m., coming from Le Havre. The Associated British Ports, the company that runs the dock, continued to support relevant government agencies with their investigations and was working with the shipping company and owners as required. Report with photos: https://www.dailymail.co.uk/news/article-8889449/Group-11-Albanian-stowaways-including-discovered-car-transporter-ship-Southampton-docks.html

A 39-year-old man suffering from a medical emergency was airlifted from the "Salome" near the Chesapeake Bay early in the morning of Jan 3, 2018, and then flown to Anne Arundel Medical Center. A helicopter crew stationed at Joint Base Andrews responded to a call from the Salome around 2 a.m. for help with the medical emergency. The car carrier, was north of the Bay Bridge headed for the Port of Baltimore at the time of the call. The rescue technician aboard the helicopter was dropped off onto the deck of the ship and then hoisted the man back to the aircraft. The patient was flown to AAMC in Annapolis.