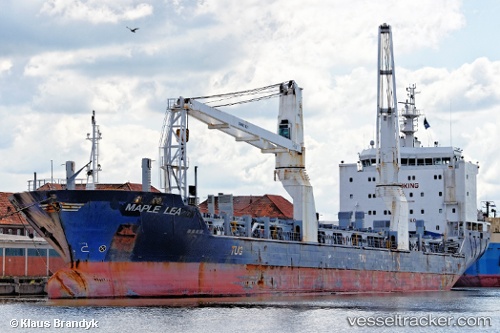 German Cargo Ship Freed After Running Aground Near Montreal

A German-flagged heavy-lift cargo ship is now free after running aground Thursday on Lake Saint-Louis, Quebec near Montreal. The 12,700 DWT MV BBC Maple Lea ran aground Thursday morning at about 8 a.m. local time on the Saint Lawrence Seaway in the vicinity of St. Nicholas Island in Châteauguay. The Transportation Safety Board of Canada (TSB) says it has deployed a team of investigators to determine the circumstances of the grounding. AIS data showed that the vessel was freed with help of tugs at 12:30 p.m. local time on Friday. A statement released Thursday from the Mohawk Council of Kahnawake said it appeared that ship’s front bow thruster hydraulic system was damaged in the grounding and the ship was leaking “droplets” hydraulic oil, although the situation posed little to no risk. The vessel is said to be carrying a cargo of scrap metal. http://gcaptain.com/german-cargo-ship-freed-after-running-near-montreal/#.VnRgofnNy9I

The "Maple Lea" ran aground in the morning of Dec 17, 2015, around 8 a.m. in Lake Saint-Louis on the Great Lakes. The ship grounded shortly after leaving Montreal after it lost propulsion power and hit a rocky shallow. It was estimated the gship had water ingress and some ballast tanks have been flooded. As the engineers were unable to repair the engine, the ship was left without power. The local authorities dispatched a lifeboat at the scene of the accident. The ship left Montreal and was headed to Ghent, but it was not clear why it headed to the Great Lakes, instead of Atlantic Ocean. The authorities were taking witness evidence for suspicious course of the vessel. The Canadian Transporation Safety Agency sent two investigators to the site.