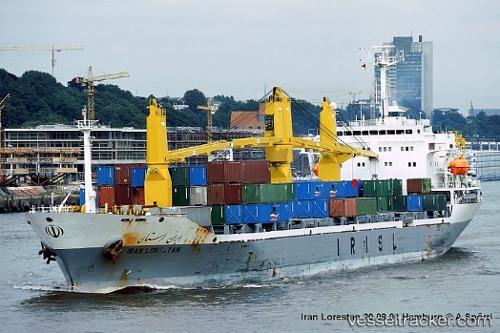 Damage was limited on the 'Saviz' when she was struck by an explosion in the Red Sea on April 6, caused by limpet mines. An Iranian Foreign Ministry spokesman, Saeed Khatibzadeh, did not say who was responsible for the explosion off the coast of Djibouti. Investigations were underway to determine the cause of the blast. Published photos, which were claimed to have been taken on the ship, showed a flooded engine room indicating that explosives were located below the waterline.

Israel has informed the United States that it attacked the 'Saviz' in the Red Sea on April 6, 2021, at 7.30 a.m. in retaliation for earlier Iranian strikes on Israeli vessels, while in the Red Sea. The 'Saviz' was stationed in the Red Sea for the past few years to support Iranian commandos sent on commercial vessel for anti-piracy escort missions The 'Saviz' was damaged below the water line. She is officially listed as a general cargo vessel. However, the Combating Terrorism Center at the United States Military Academy (USMA) described the ‘Saviz’ in a report as the “Iranian mother ship on station located in Eritrea’s contiguous waters. The ship has signals intelligence domes and antennae. It is visited by all Iranian ships moving through the Red Sea, nominally to coordinate anti-piracy measures. At least three speedboats are based on deck, which are used to ferry personnel to Yemen.”

On June 4, 2019, Saudi Arabian paramedics medevaced a wounded Iranian crew member from the "Saviz" off the coast of Yemen amid its war against the Iranian-backed Houthi rebels, the second-such aid it has offered in recent weeks. The Saudi military flew rescue paramedics to the "Saviz" 95 nautical miles northwest of Yemen’s contested port city of Hodeida. They then transported the victim to a military hospital in Jizan. Iran’s mission to the United Nations had made a request to aid the Iranian.