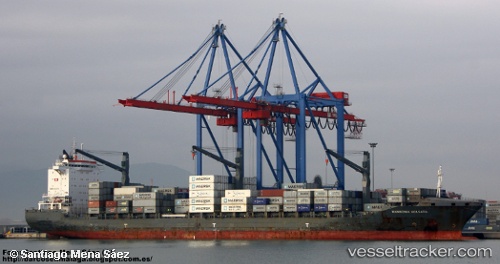 The Ecuadorian Navy seized 88 packages of cocaine stashed in container on board the 'Sealand Los Angeles' on Jan 7, 2020. The ship had left Guayaquil in the evening of Jan 6, bound for Bilbao. In the early morning of Jan 7 it was boarded by two armed persons, who allegedly, put packages into a container. The vessel arrived at Puerto Bolivar in the evening. The authorities carried out a search operation and detected four black suitcases that contained 22 blocks of cocaine each. The cocaine, initially bound for Bilbao, was offloaded.

Germany-based HAMMONIA Reederei GmbH & Co. KG (Hammonia) has completed the conversion of its vessel MV Sealand Los Angeles to utilise alternative marine power (AMP), having commissioned the associated installation at the U.S. Port of Hueneme, World Maritime News reports. "After first commissioning in Port Hueneme, the vessel could go online directly after berthing during her call to port of Los Angeles on January 17, 2017," said the company. http://shipandbunker.com/news/am/853529-hammonia-vessel-ready-to-use-alternative-marine-power-at-hueneme

Ship detained due to safety violations

Port State Control officers from the Coast Guard Sector Puget Sound discovered significant safety violations during an inspection of the "Westwood Robson" at the Husky Terminal in the Port of Tacoma on Feb 4, 2016. The vessel and crew must remain in port until the deficiencies have been corrected to the satisfaction of Coast Guard inspectors and the Classification Society. During the inspection, Coast Guard Port State Control examiners observed excessive oil in the bilge holding area, oil-soaked lagging present throughout machinery spaces and clogged oil drains, creating a significant risk of fire. Mechanical issues included deteriorated fittings that contributed to oil and coolant leaks as well as inoperable oil purifiers. The USCG continuing to monitor the Westwood Robson after discovering safety violations, and working with the crew and appropriate authorities to ensure that the issues found are corrected before the ship resumes operations.