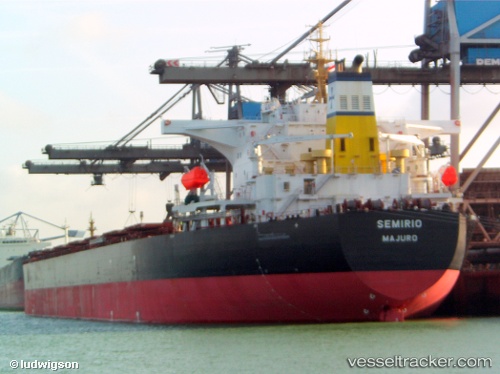 Diana Shipping Inc., a global shipping company specializing in the ownership of dry bulk vessels, has announced that, through a separate wholly-owned subsidiary, it entered into a time charter contract with SwissMarine Services S.A., Geneva, for one of its Capesize dry bulk vessels, the m/v Semirio. The gross charter rate is US$4,800 per day, minus a 5% commission paid to third parties, for a period of minimum eleven months to maximum fifteen months. The charter commenced on February 6, 2016. The “Semirio” is a 174,261 dwt Capesize dry bulk vessel built in 2007. This employment is anticipated to generate approximately US$1.58 million of gross revenue for the minimum scheduled period of the time charter. http://en.portnews.ru/news/214305/

The "Semirio" on Apr 21, 2012, rescued the crew of the burning Taiwanese trawler "Hsin Man Chun" 700 miles off the west coast of Guam. At approximately 4:30 p.m., local time, the Coast Guard Guam received an initial alert from an EPRIB from the "Hsin Man Chun", a 70-foot Taiwanese fishing vessel. After a request for assistance from the Coast Guard, VP-1’s P-3 located 10 crew members from the fishing vessel that was reported to be on fire. The P-3 spotted eight crew members in a life raft with two crew members still on the burning vessel’s bridge. The P-3 deployed two life rafts to assist crew members in distress. At the time of the request for assistance, the "Semirio" was only 40 miles away from the distressed vessel. Once on scene, the 980-foot bulk carrier launched a small boat and successfully rescued all 10 crew members. Report with photos: http://www.d14.uscgnews.com/go/doc/800/1373547/