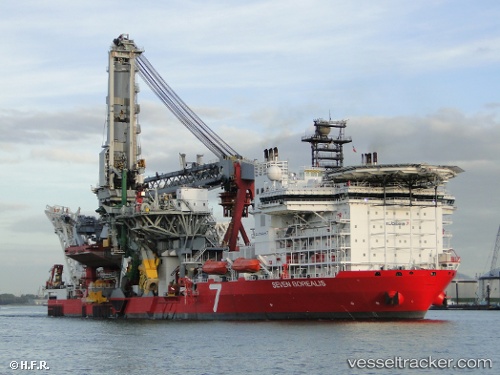 UK-headquartered subsea specialist Subsea 7 has been awarded a contract by Pharaonic, for work offshore Egypt in the Atoll field. The contract, which is described as ‘substantial’ putting it in the $150-$300m range, includes the engineering, procurement, construction and installation of more than 40km of rigid pipelines and associated structures for the new Atoll field, tying it into the existing Taurt field. A 105km umbilical will also be installed linking the Atoll field to shore. Initial work has already begun and the offshore work is projected to commence in the second half of 2017, utilising vessels Seven Borealis, Seven Eagle and Seven Arctic. “We are delighted to strengthen our presence in Egypt. This substantial contract award recognises our technical expertise and track record of strong execution for Pharaonic Petroleum Company,” commented Gilles Lafaye, region VP for Africa at Subsea 7. http://splash247.com/subsea-7-wins-epci-contract-offshore-egypt/

Offshore contractor Subsea 7 says it has been awarded a $150 million subsea, umbilical, riser and flowline (SURF) contract by Maersk Oil for the development of the Culzean field in the UK North Sea. The contract award comes just one day after Maersk Oil won approval from the UK’s Oil & Gas Authority to develop the field, said to be the largest gas field discovered in the area in more than a decade. The ultra-high pressure, high temperature field is located in Block 22/25 of the Central North Sea at a water depth of approximately 90 meters. The scope of the contract includes project management, engineering, procurement, construction and installation of a 22″ diameter 52 km gas export pipeline connected to the Central Area Transmission System (CATS), and a 3.6 km pipe-in-pipe (10″ outer pipe and 6″ inner pipe) providing insulation for the transportation of the condensate to the in- field Floating, Storage and Offloading facility (FSO). The pipe-in-pipe will be laid with a 4″ piggy-back line that will transport fuel gas to the FSO. Subsea 7 will also provide subsea structures, tie-ins to the Culzean platform facilities and pre- commissioning expertise, according to Subsea 7. Project management and engineering work is expected to commence immediately from Subsea 7’s Aberdeen office. Offshore activities will utilize a number of Subsea 7 vessels including the highly versatile pipelay and heavy-lift vessel, Seven Borealis. Offshore operations are scheduled to commence in 2017. http://gcaptain.com/subsea-7-lands-150-million-culzean-field-contract/#.Veach_mvG9I

Subsea 7 S.A. (Oslo Børs: SUBC, ADR: SUBCY) today announced the award of a contract with a value of approximately USD 500 million by BP, and partner DEA, for the development of the Taurus and Libra subsea fields offshore Alexandria, Egypt. The contract is the first phase of Egypt’s West Nile Delta project where field development will be at depths ofapproximately 800 metres.The contract scope includes the engineering, procurement, installation and pre-commissioning of subsea infrastructure required to develop the hydrocarbon resources from nine wells including 75 kilometres of umbilicals and 100 kilometres of pipeline.Engineering and project management work will commence immediately and will be undertaken at Subsea 7’s Global Projects Centre in London. Fabrication of the subsea structures and spools will be carried out at the Petrojet Maadia yard near Alexandria. Offshore installation is scheduled to commence in the second half of 2016 using the Subsea 7 pipelay vessel, Seven Borealis, and heavy construction vessel, Seven Arctic.Subsea 7 is one of the world’s leading global contractors in seabed-to-surface engineering, construction and services to the offshore industry. The Company provides technical solutions to enable the delivery of complex projects in all water depths and challenging environments. http://en.portnews.ru/news/203983/