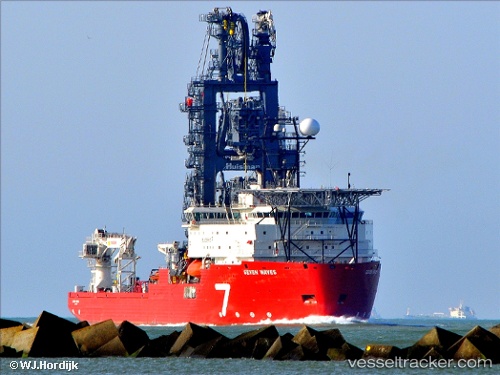 Subsea 7 S.A. has announced the award of contracextensions for three Pipelay Support Vessels (PLSVs) currently on long-term day rate contracts offshore Brazil. These extensions have a combined value of approximately USD 250 million. The firm contract periods for the Seven Waves, Seven Rio and Seven Sun will now end respectively in Q2 2021, Q3 2021 and Q2 2022.The extensions have been awarded at the same day rates and on the same commercial terms as the original contracts.

July 28 - Subsea 7's construction vessel Seven Waves has become one of the first ships to use the extended quay at Lerwick Port's deepwater Dales Voe Base in the UK.The 18,666 dwt vessel is being mobilised at the Scottish port ahead of a contract offshore Canada. The first phase of the extended quay's construction has just been completed, with the second phase ready to begin. The first ship to arrive at the extended quay was the coaster vessel Eendracht, which delivered supplies for transfer to Seven Waves. "Seven Waves is an early harbinger of the type of work which the expanded Dales Voe Base, with its enormous capacity, quay strength, water depth and laydown space, is ideally suited for in supporting a wide range of offshore industry projects," said Lerwick Port Authority's harbour master and deputy chief executive Captain Calum Grains. http://www.heavyliftpfi.com/news/seven-waves-sails-into-lerwick.html

The SEVEN WAVES,is a flex-lay vessel which will be used in the development of deep-sea oilfields of up to 2,500 metres off the coast of Brazil on behalf of Petrobras. The vessel has an overall length of 146 meter, a beam of 30 meter and a class-2 dynamic positioning system. It has a vertical lay system with 550t top tension capacity and twin ROV systems. By now the SEVEN WAVES,has left for Brazil, fully prepared for many years of duty.