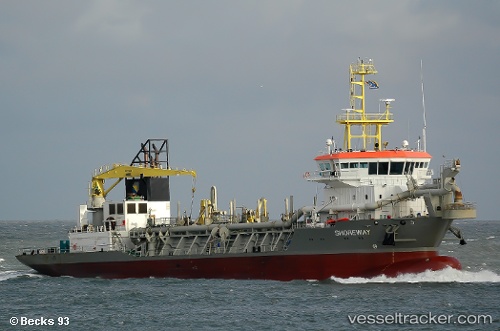 Tha Marine Accident Investigation Branch (MAIB) published its report on the collision of the "Shoreway" with the yacht "Orca" off the coast of Felixstowe in which the skipper's wife drowned. It concluded the accident happened because neither vessel had a proper lookout when the yacht was hit by the dredger in good visibility, seven miles off Felixstowe in Suffolk on June 8, 2014. Following an alteration of course by the chief officer on the "Shoreway", the "Orca" entered a blind sector of obscured visibility caused by equipment on the dredger's bow which meant she remained unseen by the chief officer until seconds before the collision, the report by the said. Mr. Ingram saw the "Shoreway" about 1.6 miles away and, from its aspect at the time, judged there to be no risk of collision and decided to engage his autopilot and go briefly below. The ships collided at 1.31 p.m. with the badly damaged "Orca" sinking within minutes. Ingram was rescued from the water by the "Shoreway"'s rescue boat but Mrs Ingram, whose mobility was impaired following recent medical treatment, could not be found despite an extensive air and sea search. Her body was recovered from the sunken yacht by divers the next day. Of the couple's two dogs on board, one survived. The MAIB said the Shoreway officer of the watch, who was the chief officer, should not have been alone on the bridge at the time of the accident. Neither the chief officer, who was alone on the bridge of the "Shoreway", nor the skipper of the "Orca", who was below deck in the cabin, were maintaining a proper lookout during the period immediately prior to the collision. The risks of vessels, especially small craft, not being detected in the blind sector on the "Shoreway" had never been assessed by the vessel's owners Boskalis Westminster Shipping BV or the crew and were not mentioned in the master's standing orders or the vessel's safety management system. The safety management system on Shoreway was a computer-based, fleet-wide, generic safety management system that was of little benefit to the ship's crew as it contained no vessel-specific information, guidance or instructions. The MAIB made a series of safety recommendations and also said that action had been taken by marine and port authorities as well as by Boskalis Westminster.

The chief mate of the "Shoreway" which was involved in a fatal collision off eastern England on June 8, 2014 has received a six-month prison sentence suspended for 18 months. Gerardus Chapel was on the bridge of Royal Boskalis Westminster's trailing suction hopper dredger. The vessel had just finished dredging and was heading out to sea to dump spoil from quay extension work at the Hutchison Ports-owned Port of Felixstowe, in Suffolk. Sailing in the opposite direction, in a channel used by leisure craft, was the yacht "Orca" owned by Peter and Bernadine Ingram. The dredger changed course slightly from the deepwater channel and proceeded south into an area known to be frequented by sailing yachts, especially at the weekend and hit the 9 m yacht head-on, and its anchor gouged a large hole in the boat's starboard side. The "Orca" sank immediately, and although Peter Ingram and a dog swam clear, Bernadine Ingram was trapped in the galley. Her body was recovered the following day. The Maritime & Coastguard Agency (MCA) reported that when he was interviewed by officers after the accident, Chapel admitted that he did not see the yacht, despite excellent visibility and fine weather at the time. Passing sentence at Ipswich Crown Court, His Hon Judge Devaux credited Chapel with accepting responsibility and co-operating with investigators. He pleaded guilty to "conduct endangering ships, structures or individuals", under Section 58 of the Merchant Shipping Act. The Maritime Accident Investigation Branch's investigation into the accident is at the consultation stage.

A woman was missing after a yacht collided with the "Shoreway" off Felixstowe on June 8, 2014, at 1.30 p.m. The yacht sank within five minutes of colliding with the dredger. The Thames Coastguard scrambled a huge rescue team to the incident site one mile off the coast. A man who had been on board the yacht was quickly pulled to safety from the water by the dredger crew and taken to hospital for precautionary checks. But the other occupants â a woman and two dogs â were still missing. It was believed they were wearing life-jackets, and rescuers have not given up hope of finding them alive. Rescue workers have been scouring Felixstoweâs coastline and Harwich International Port. It was decided the search would continue overnight, with at least one lifeboat remaining on the scene, before it was stepped up again the following morning. The search operation would last for 23 hours Involved in the search were the Felixstowe Coastguard Rescue Team, three lifeboats â two from Harwich, one from Walton â two pilot boats, a dive boat, the search and rescue helicopter from RAF Wattisham along with a number of other vessels in the area. Markers have been put down around the accident site to help divers searching the area at slack water find any clues to help the search. At around 4 p.m., the search area was widened to at least three miles in all directions of the crash site after the currents and wind conditions were taken in to account. Thames Coastguard was co-ordinating the search. The woman's body was retrieved from the sea on June 9 at around 5 p.m. Report with photo: http://www.ipswichstar.co.uk/news/update_search_will_continue_overnight_for_missing_woman_and_two_dogs_after_yacht_and_dredger_crash_off_suffolk_essex_coast_1_3634157