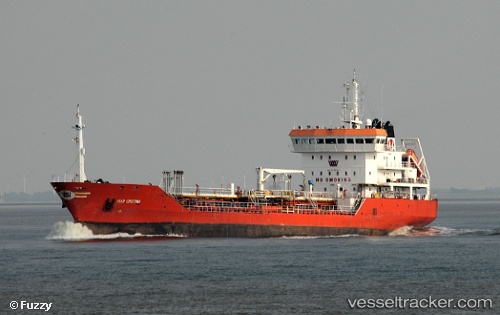 The "Silver" over to the Astican yard, where it had remained for three years with a minimum of maintenance work. The owner had decided to abandon the tanker due to the excessive cost of its repair. As a result, a court ordered Astican to take ownership of the "Silver", and now partners of the company Logiscrap, specialized in the dismantling of ships, have shown their interest in acquiring it. Prior to its sale, the shipyard has carried out different steel works to seal the cracks in the hull, as well as the relevant stability tests. The destination of the "Silver" was still unclear. If it is scrapped, this was not planned at Logiscrap's facilities, located on the Reina Sofía jetty in Puerto de La Luz. The state in which the ship was may allow its return to operations. In any case, the transaction is still waiting for the final authorization of the Port Authority of Las Palmas for the transfer. On Dec 23, 2013, the "Silver" was off Tan-Tan at the Moroccan coast, 221 kilometers from Lanzarote, with 5,000 tons of fuel bound from Santa Cruz de Tenerife to the thermal power station in the port of Ouatia when it ran aground. For several weeks it remained stuck. A salvage attempt with a tug from Gran Canaria failed. For about a week, Dutch technicians lightered the cargo from the ship to other tankers, which in turn transferred it to the plant. On Jan 14, 2014, the "Silver" was refloated and towed to Gran Canaria for repairs, although Derhem Sliman, owner of the ship, announced that he would probably ababdib the vessel because he could not cope with the costs. The ship remained two days about five miles from Maspalomas, with the danger of sinking due to hull damage suffered in the incident. On Jan 20 the odyssey of the ship ended in Puerto de La Luz. Months later was taken to the dry dock of Astican. Since then, the "Silver" remained stranded in the yards awaiting a response from the owner. Given the lack of news and the accumulation of invoices that was requested by Astican for the use of the dry dock, a court recently determined that the port company should take over ownership. French report with photo: http://www.laprovincia.es/las-palmas/2017/05/07/petrolero-silver-deja-puerto-tres/936030.html

The Silver docked in Las Palmas...

...on Jan 19 with the salvage tug "Union Sovereign" alongside following the grounding off Tan Tan: http://www.shipspotting.com/gallery/photo.php?lid=1975471

On Jan 19 the "Silver" at 9.45 a.m. was docked at the Reina Sofia jetty in the port of La Luz at Las Palmas by the tugs "Sea Bear" and "Union Sorvereign" to be examined thoroughly and assess its condition, in order to repair it. The ship was allowed to anchor off Luz since Jan 18 where the port captain examined the vessel "in situ" before the appropriate permissions were granted. Ship representatives and insurers as well as the Dutch salvors were on site.