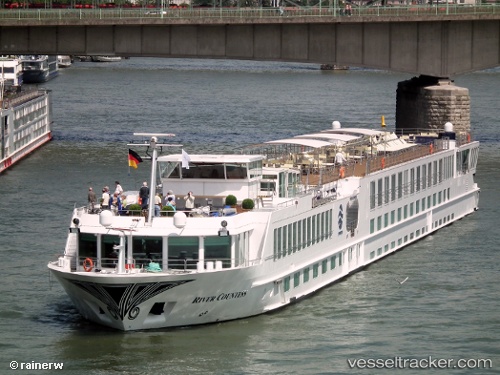 Repair to be carried out in Trieste

On June 17, 2019, the "River Countess" was loaded aboardthe heavy load carrier "Yacht Express" (IMO:9346029) in Venice. It was bound to Trieste, where repairs will be carried out. On June 18 at 7.15 a.m. the transport arrived in the port, and thie river cruise ship was floated out in the run of the day.

Cruises had to be aborted

Both the "MSC Opera" and "River Countess" remained stationary in Venice on June 4 and had to aboart their cruises due to the damages suffered. Reparis of the "River Countess" wree expected to take several weeks. However, the ship was water tight and may be towed to a repair yard soon. Repairs of the "MSC Opera" were already underway. The bow suffered a number of breaches at both sides of the foreship due to the allision with the quay on the one and with the river cruise ship on the other side, which needed to be welded. The durance of the work was not yet known, so the cruise was aborted. The embarked passengers could use the ship as floating hotel and may stay in Venice for the time being. All affected passengers will be fully refunded by MSC Cruises. The investigations into the accident were going on. The authorities were evaluating the electronical data on board the "MSC Opera", checking the technical equipment and interrogating the crew. It was expected that the ship would be seaworthy again on June 7 and leave the port bound to Bari. The clearance of cruise ships in Venice has meanwhile returned to normal. The port authority has cleared all berths. German report with photo: https://www.kn-online.de/Nachrichten/Panorama/Kreuzfahrtschiff-MSc-Opera-muss-in-Venedig-erst-repariert-werden

In the morning of June 2, 2019, at 8.30 a.m. the Panama flagged cruise ship "MSC Opera",upon its arrival from Corfu, was in collision with the "River Countess", which was berthed at the Venice Passenger Terminal, upon entering the port of Venice. Despite assistance of two tugs "Lourdes C" (IMO: 9170341) and "Elma C" (IMO: 9323156) at the stern, the ship veered off course in the canal of Giudecca at San Basilio. The cruise ship got out of control due to a mechanical problem, the engine telegraph was blocked to increase ahead thrust, and the vessel slammed into the "River Countess" bow to bow after one towing wire broke, despite dropping the port side anchor. Then the smaller ship was broken lose and pushed along the quay while the "MSC Opera" slammed along the berth until finally being stoppe. Several of the 130 passengers of the smaller ship fled from board, five were injured. Four were tourists, aged between 67 and 72 years. Of these, an American woman has already been discharged after first aid treatment. The other three were a New Zealand and two Australian; one of them, a 67-year-old, was in a bit more serious condition, and was evaluated by doctors. The others suffered orthopedic trauma by falling or while fleeing from board. The "River Countess" suffered severe damage to the bow at starboard side, also the "MSC Opera" was damaged while sliding along the starboard side of the river cruise ship at port side and scrubbing along the quay at starboard side and had minor damage at the bow. The quay suffered considerable damage too with concrete having been broken out. Reports with photos and video: https://www.tgcom24.mediaset.it/cronaca/veneto/venezia-incidente-tra-una-nave-da-crociera-e-un-battello-5-feriti_3212169-201902a.shtml https://www.repubblica.it/cronaca/2019/06/02/foto/venezia_urto_tra_la_nave_da_crociera_msc_opera_e_il_battello_river_countess-227780346/1/#1 https://www.ilfattoquotidiano.it/2019/06/02/venezia-in-tilt-dopo-lo-schianto-della-msc-opera-i-comitati-protestano-dopo-sette-anni-la-situazione-grandi-navi-e-in-stallo/5226521/ https://actu.fr/monde/videos-construit-saint-nazaire-paquebot-msc-opera-rate-accostage-venise_24586405.html