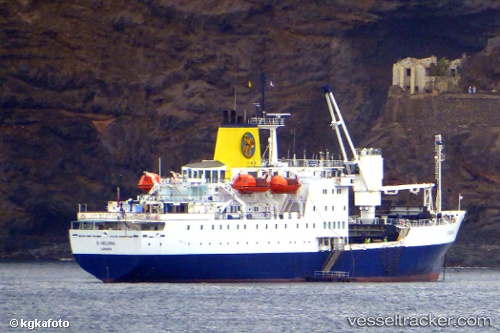 The RMS "St. Helena", Britain’s last working postal ship, will start a new life as a floating armory, packed with automatic weapons, bullet-proof jackets and night vision goggles, all stored for maritime security operatives. Renamed the MNG "Tahiti", the 3ship will undergo some tweaks before sailing to the Gulf of Oman where it will be used to ferry guns and guards to passing vessels navigating stretches of water lurking with pirates, its new operator said on Apr 17, 2018. The floating armory firm MNG Maritime hoped to have it poperating by the middle of the year. Tahiti Shipping, a subsidiary of MNG Maritime, bought the ship for an undisclosed fee on Apr 17, the St. Helena government said. The construction of a commercial airport on the isolated island in the middle of the South Atlantic rendered the ship obsolete, prompting St. Helena authorities to put it up for sale and begin planning a gala Theship was purpose-built by the British government in 1989 to service the island and is the last of a royal mail fleet that once connected the far-flung tentacles of the old British Empire. Its final voyage was marked with a public holiday on St. Helena, with flag-waving crowds gathering on the rocky coastline to catch one last glimpse of the ship that had delivered them everything from car parts to Christmas turkeys.

Royal Mail Ship to be withdrawn and sold

St Helena Line (SHL) has announced that it is to withdraw the "St Helena" from service in February 2018 and has appointed London ship broker CW Kellock & Co Ltd to handle its sale. Operated by SHL on behalf of St Helena Government (SHG), RMS has been part of the Island’s history for over quarter of a century and provided the sole regular means of access to the emote UK Overseas Territory located 1200 miles off the West coast of Africa in the South Atlantic. The "St Helen"a is one of only four ships left in the world which has the right to carry the Royal Mail Ship (RMS) prefix. The ship currently operates out of Cape Town calling at both St Helena and Ascension Islands on a regular schedule. With the start of scheduled passenger flights to St Helena on Oct 14, 2017, providing the main passenger access to the Island, the "St Helena" will be withdrawn from service. The "St Helena" is now embarked on its final programmed voyages and is expected to finish its last voyage in Cape Town on Feb 15, 2018. SHL has appointed London ship brokers CW Kellock & Co Ltd (Part of the Eggar Forrester Group), to handle the sale. Commenting on the sale process and her withdrawal from service, SHL’s Chairman, Matt Young said, “The RMS St Helena has played a vital role in sustaining St Helena’s population and, for the past 27 years has been the sole means of regular access to the Island. “Her combined passenger accommodation and cargo design makes her well suited to a number of different trading options and we are confident that she can continue to play an important role elsewhere in the world”.

Travellers are being advised to act fast to enjoy one of the final chances to sail on board one of the last working Royal Mail Ships in the world, which was due to be retired this summer. The RMS St Helena is to continue serving her remote South Atlantic island namesake until July 1st 2017, the St Helena government has announced, with berths expected to fill up quickly. The news comes as the tiny British-controlled island in south Atlantic Ocean continues to struggle with technical issues surrounding its new airport. The RMS passenger and freight service will continue to operate between Cape Town, St Helena and Ascension Island with the extended schedule confirmed last week. Seen by many as an integral part of a visit to St Helena, the voyage takes five days by sea from Cape Town and three days from Ascension, and affords the opportunity for passengers to embrace a slower pace and become immersed in island life before stepping foot on the rocky outcrop. http://www.breakingtravelnews.com/news/article/rms-st-helena-to-serve-island-until-summer-2017/