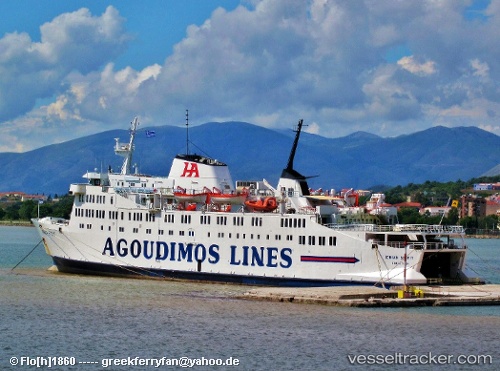 The 'St. Damian' was detained by local authorities in Vlora because of a suspected discharge of hazardous solid waste ashore. However, the owners declared that the subject materials were normal waste generated by the vessel after the usual operations it underwent in the shipyard recently. The owners also declared that the waste discharge operation was carried out in a regular way through a locally licensed company and its truck which collects the waste generated from the vessel, regularly. The vessel remains detained at the Vlore port since Feb 20, 2020. The Albanian police had seized the ferry and arrest six people, among them also the captain of the ship. The directors of two Albanian companies, "Delfini 1", which appeared to have ordered the load stating that they were cleaning chemicals, and "Kornuzi", operating in the waste collection sector and which should have disposed of the suspect cargo. The two companies previously made at least 15 other imports from Italy. The investigation into the case was entrusted to the special prosecutor for the fight against organized crime, Spak. The operation, called "Amiant", was conducted by the Albanian Criminal Police Department, the direction of the local police of Vlora, the border and the direction of migration of Vlora in collaboration with the Prosecutor of Vlora and the ministry Environment. Report with photos: https://www.quotidianodipuglia.it/regione/rifiuti_tossici_brindisi_albania_eni_fusti_traghetto-5065878.html

The "Ionian Spirit" is actually arrested in Brindisi because of unpaid port charges.

A ship with nearly 1,200 Asian and African migrants, many needing medical attention after weeks with little food or water, left the besieged Libyan city of Misrata Friday for rebel-held Benghazi, an international aid agency said to Reuters. The chartered Greek vessel, Ionian Spirit, unloaded 400 tonnes of aid supplies in Misrata overnight despite shelling Thursday, the International Organization for Migration said. "It left in the early hours of this morning with nearly 1,200 people on board," IOM spokesperson Jemini Pandya told Reuters. Read more http://www.canada.com/business/Migrant+ship+leaves+besieged+Misrata/4626954/story.html