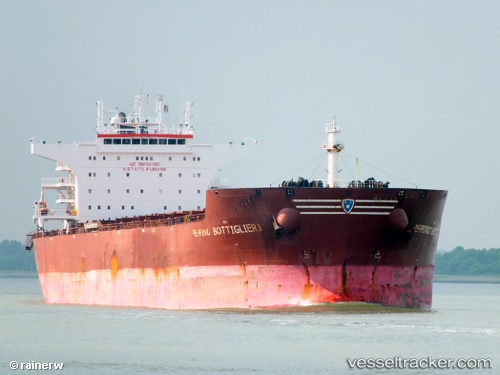 US-based private equity fund Bain Capital Credit has put three 10-year old bulkers of the fully controlled Giuseppe Bottiglieri Shipping Company on the market. Brokers tell Splash that the bulkers being circulated are post-panamaxes, Paola Bottiglieri, Peppino Bottiglieri and Giovanna Bottiglieri. All are available for inspection and the seller is looking for interested parties. According to VesselsValue.com each unit is valued between $13m and $15m.

The "Peppino Bottiglieri" was arrested in Singapore on May 4, 2018, at 3.50 p.m. The arresting solicitor was Clasis LLP. The vessel was moored at Eastern Special Purpose Anchorage The ship has been released on May 12.

The "Peppino Bottiglieri", enroute from San Lorenzo and Bahia Blanca to Cai Mep with a cargo of 74,305 tonnes of soya beans and corn, was rendered service on March 23, 2018, by Tsavliris Salvage (International) Ltd, under the terms of Lloyd's Form of Salvage Agreement after grounding at Bahia Blanca short time after having left the port. The vessel was outbound from Bahia Blanca with destination Cai Mep, Vietnam laden with 74,300t of soya beans and corn. Tsavliris Salvage was contracted to provide assistance and on the same day a salvage master and salvage officer were able to board the vessel. The tugs "Ona Topaz" (5,150bhp, 75tbp) and "Ona Triunfo" (5,086bhp, 75tbp) were mobilized from Bahia Blanca to assist the vessel. Just one day later, following an underwater inspection, the "Peppino Bottiglieri" was refloated by the tugs which then escorted the vessel to the Bahia Blanca Anchorage on March 25 at 2.15 p.m. for inspection as instructed by port authorities. Two days later, and just five days after the initial grounding of the vessel, all services from Tsavliris were terminated and the operation completed. The ship sailed on March 26, bound for Puerto Madryn, ETA March 28. Report with photo: http://www.maritimejournal.com/news101/tugs,-towing-and-salvage/news-from-tsavliris