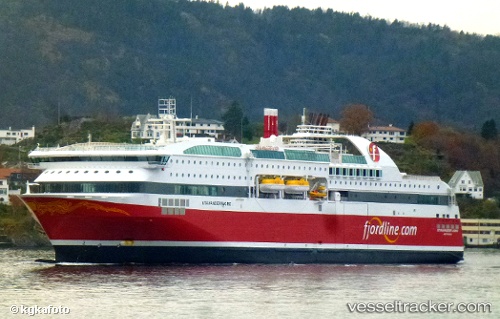 Passenger presumed dead after fall from board

A man was believed to have died after falling overboard from pthe "Stavangerfjord" 11 miles off Mandal. He fell into the sea from the upper deck of ferry on June 22, 2019, at 12.30 a.m. The incident was also captured on video. The HRS end the SAR operation and changed the status of the search to a recoveryorganized by the police in Agder at 5.50 a.m. The emergency services initiated a comprehensive rescue operation when the incident report came. The ferry had turned around immediately, and an emergency message was sent outto other vessels in the area. Rescue helicopters were sent from Sola, in addition to the lifeboat "RS Bill" from Mandal and "Kaptain Skaugen" from Farsund and the Coast Guard vessel "Nornen" assisted. The temperature of the water was around 14 degrees.

Ferry delayed due to technical trouble

on Sep 11, 2018, the "Stavangerfjord" had technical problems and failed to dock at Risavika in Sola at 7 p.m. Just before it arrived, the ferry turned around and went northward again. The captain announced to the passengers that there were technical problems as the crew discovered that it did not have contact with the program that controls the bow thruster. The ferry went for a while back and forth off the coast of Randaberg while trying to find the error. The manufacturer Rolls Royce was running a remote search. Around 8 p.m. the "Stavangerfjord" finally managed to dock at the wharf in Tananger. Norwegian report with photos: https://www.aftenbladet.no/lokalt/i/dd1Lk1/Danskebaten-matte-snu-ved-Risavika

Following a conversion which started on 1 November, Fosen Yard in Rissa, Norway, has handed STAVANGERFJORD back to Fjord Line earlier today, 13 December. The ship will take up service again on Fjord Line’s Bergen-Stavanger-Hirtshals-Langesund route tomorrow, 14 December.