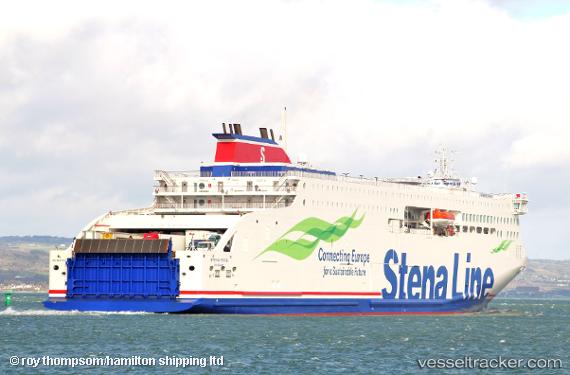 An air ambulance attended a medical emergency of a crew member on board the 'Stena Edda' en route from Belfast to Birkenhead in the night of May 23, 2022. First aid assistance was provided by fellow crew members, but a doctor advised that the patient should be transported to Aintree Hospital. The patient was airlifted to the Aintree Hospital.

Captain of cargo ship fined for near collision

Kolapi Utime, 64, of Viridian Square in Aylesbury, the masrer of the 'Scot Leader', has been fined with £6,384 pounds after almost causing a collision with the 'Stena Edda' in Belfast Lough. The Southampton Magistrates' Court heard that during the incident in March 2021 he turned his vessel in front of the 'Stena Edda', which had 503 people on board. It was found that he increased the speed of his vessel, which is operated by Scotline, creating the risk of a collision. Utime communicated with the 'Stena Edda', requesting that it altered its course to port, which the Maritime and Coastguard Agency (MCA) said was "contrary to good seamanship and collision avoidance". The Stena ferry had already started to turn starboard to avoid a crash. Utime admitted his role but said his attention had been on the ferry 'Stena Superfast VIII' that was approaching. Mark Flavell of the MCA said it was a "dangerous situation" caused by Utime "failing to adhere to the collision avoidance rules. There could have been disastrous consequences. "The MCA will always look to take appropriate and necessary action, prosecuting those seafarers who jeopardise others by showing a complete disregard for the laws of the sea. Such offences are not acceptable and those unwilling to follow rules and regulation and improve standards of safety will face the full weight of the law."

Medevac off Isle of Man

A child was airlifted to hospital after falling ill on board the 'Stena Edda'. A Coastguard helicopter was scrambled while the ship was enroute from Belfast to Liverpool service on March 17, 2021, at 1.47 a.m. after the ship requested assistance 13 nautical miles East of Douglas, Isle of Man. The child, along with a parent, was airlifted to Liverpool's Alder Hey Children's Hospital with the Coastguard team setting up a helicopter landing site at the hospital. The 'Stena Edda' continued its journey to Liverpool.