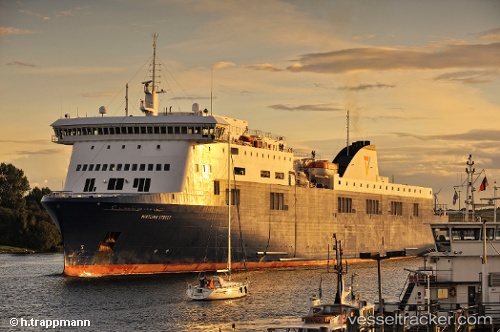 Search for person lost over board

On July 15, 2020, a person fell overboard the 'Stena Flavia' off Nynäshamn. At 7 a.m. the police and the MRCC were alerted by the ship which operates the Nynäshamn-Ventspils route and was on its way to Nynäshamn. Several search units and, staff from the Sea Rescue Society, police, one pilot boat and a rescue helicopter as well as a police helicopter were mobilized. The Maritime Police was participating in the operation. The search operation took place near Bedarön in Nynäshamn. Neither Stena Line, the police nor the sea rescue had any further information about the circumstances.

Coming from Gdynia on Nov 11 at 11.40 a.m, the ferry "Pulpca" allided with the quay of berth 4 at the Scandianvia Quay in Lübeck-Travemünde when approaching the port. The ship veered too much to starboard side running Trave upstream in low visibility of only 550 meters. The quay, pontoon and some installations suffered considerable damage. Also the Ventspils-bound "Stena Flavia" suffered slight damage. The wall rail and a lifeboat were damaged. The "Pulpca" berthed at the Sealand Quay 4 at noon. None of the crew of 20 and one passenger were injured. The water police Lübeck detained both ships for investigations. German reports with photos: http://forum-schiff.de/phpBB3/viewtopic.php?f=9&t=1070#p109159 http://www.hl-live.de/aktuell/textstart.php?id=95106