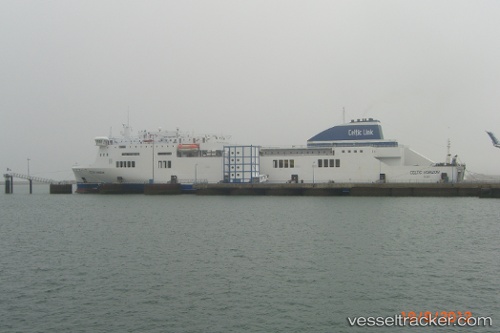 Stena Line’s livestock sailings from Rosslare, County Wexford, to Cherbourg have been cancelled for another week. The 'Stena Horizon' had entered dry dock in Belfast on March 29, and was originally expected to resume sailings on April 12;. But this has been delayed until April 19. The ferry will resume sailing on April 26. While the 'Stena Horizon' is in dry dock, no livestock will be transported by Stena Line from Rosslare to Cherbourg. At this time of the year, theferry brings trucks carrying Irish calves from Rosslare to a lairage in Cherbourg, France, where the calves are rested and fed before continuing their journey to a new home in countries on mainland Europe.

The 'Stena Horizon', en route from Cherbourg to Rosslare, suffered a double engine failure in position 49 53 35.0N, 005 12 10.0W, four nautical miles south of Lizard Point on July 25 at 10.25 p.m. The vessel was standing by for an assessment by an engineer. After the crew rectified the engine defect, the ferry continued its voyage to Rosslare on July 26 at 1 a.m. and arrived in port at 11.35 a.m.

Two passengers fell over board and were rescued

Two people have been rescued from the water after going overboard on the 'Stena Horizon' on Feb 25, 2021, at 6.45 p.m. as the ferry approached Belfast Harbour. The two people have been plucked from the water by rescue crews from two ferries. Stena Line deployed emergency response crews from both the 'Stena Horizon' and 'Stena Superfast VIII' which was in the vicinity at the time. The Northern Ireland Ambulance Service dispatched two Rapid Response Paramedics, two Emergency Crews and three HART Officers to the incident at 7 p.m. The rescued were attended to by the emergency service crews waiting on the dockside in Belfast. Following assessment and initial treatment at the scene, one patient was taken to the Royal Children’s Hospital in Belfast and an adult to the Royal Victoria Hospital’s emergency department. Stena Line has informed all relevant authorities of the incident and was currently assisting with the various investigations now under way. The matter has also been reported to the PSNI.