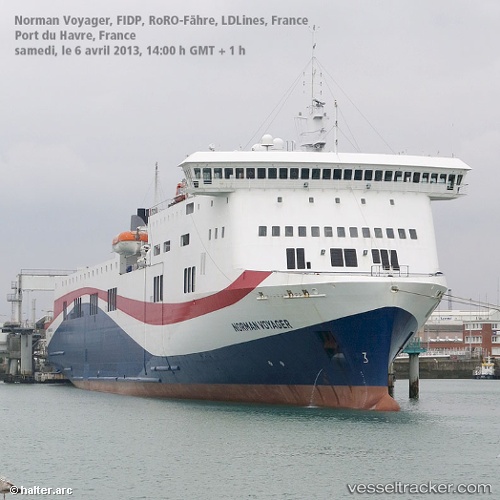 On Feb 12, 2015, at 10:00 a.m. the CROSS Corsen was alerted by the Maritime Medical Consultation Center (MMCC) in Toulouse because a Romanian passenger of the "Etretat" was suffering from chest pain. The ship was 20 nautical miles north of the island of Batz en route to Portsmouth. The patient was aged about forty years. An immediate medical evacuation was recommended. The CROSS Corsen dispatched a Cayman helicopter of the Navy which took off at 10:26 a.m. from naval air base Lanvéoc- Poulmic with a medical team of the health servic on board. The helicopter reached the ferry at 10.45 a.m. The medical team was immediately hoisted onto the ferry. The patient was hoisted at 11:30 a.m. and taken to the hospital Cavale Blanche in Brest where he was delivered at noon.

The new ETRETAT used to sail before as the NORMAN VOYAGER for LD Lines/DFDS before being chartered by Brittany Ferries to be used between Le Havre-Portsmouth and Santander (weekly) she will be permanently based in Le Havre, and will be introduced next March 26th. On their side, DFDS replaced the vessel sailing also on the Portsmouth run by the SEVEN SISTERS.

WEXFORD'S ' no-frills' ferry operator Celtic Link is going to add a few more frills for passengers with the purchase of a new ferry. The company has confirmed that it has purchased a new ferry, which it has named Celtic Horizon, to replace the Norman Voyager on its Rosslare to Cherbourg route. Rory McCall of Celtic Link Ferries, which is owned by the O'Flaherty brothers of Kilmore Quay and Ramsgrange-based O'Leary International Transport, said that the new ferry, which will be 'faster, bigger and better', will be launched in mid-October. Celtic Link, the low-cost operator between Ireland and France, stepped up its capacity and passenger offering when it bought the Norman Voyager in 2009, but just two years later Mr McCall said the demand is there to justify further 'significant investment'. http://www.newrossstandard.ie/news/celtic-links-new-ferry-will-launch-in-october-2855338.html