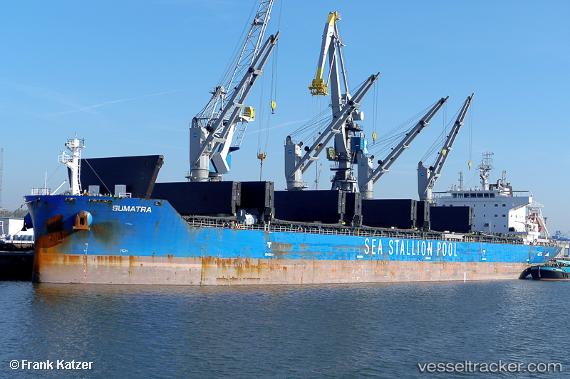 The "Sumatra" which grounded in the vicinity of Angostura Inglesa on June 28, currently remained aat the emergency anchorage near Wallace Islet, Angostura Inglesa, approximately 800 kilometers north of Punta Arenas, with the support of the tug "Beagle" and the oceanic patrol boat "Marinero Fuentealba", the general service patrol "Puerto Natales" and the speedboat "LSR 4431". As a precaution, oil booms were laid out to contain any possible spillage that might occur. The maritime authority has decided to open the channel for the traffic of ships and the support of farming centers. A second tug was expected on site on July 3 in order to tow the ship to an anchorage that does not interfere with the normal transit of ships, where repairs will be completed so far that the bulkcarrier may proceed to a port for permanent repairs. The Maritime Prosecutor was carrying out the first steps in the investigation to determine the causes of the incident. Spanish reports with photos: http://elpinguino.com/noticia/2018/07/02/investigan-encallamiento-de-nave-portuguesa https://www.mundomaritimo.cl/noticias/tercera-zona-naval-apoyo-a-buque-portugues-en-una-emergencia-al-sur-de-punta-arenas

On July 2, the 'Sumatra' was still at anchor in pos. 48° 59.24' S 074° 25.50' W, waiting for a second tug to be towed to a safe anchorage, where she wouldn’t hamper passing ship traffic. On June 28 she had contacted the bottom of the Canal Messier in the Chilean Magellan region, in pos. 48 12S 074 25W, while proceeding in southern direction from nLirquen to Punta Arenas. The ship was moored north of Puerto Eden to undergo an inspection.

On June 28, 2018, at 2.30 p.m. the "Sumatra" with a crew of 21 on board had a bottom touch near Puerto Eden in the vicinity of Angostura Inglesa. As a result of the incident, the vessel was forced to anchor in pos. 48° 58.79' S 074° 25.05' W in the vicinity of the Isla Medio Canal approximately 800 kilometers north of Punta Arenas. A patrol boat based in Puerto Eden was sent to assist the emergency. In addition, the patrol boats "Puerto Natales" and "Marinero Fuentealba" were deployed with an expected arrival on June 29. The bulkcarrier remained anchored, without to get navigational support to a safe area. The Navy launched an investigation process to determine the causes of the incident. The bulkcarrier had sailed from Lirquen on June 25 at 1.30 a.m. and was bound to Recalada. Spanish report with photo: http://elmagallanico.com/2018/06/buque-portugues-sufre-emergencia-en-aguas-magallanicas