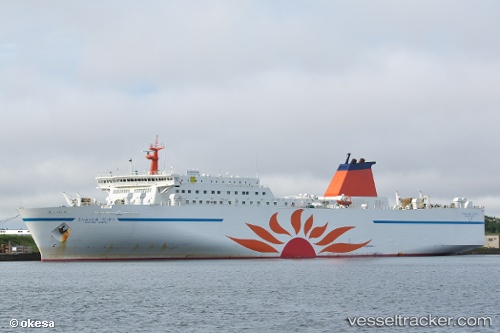 One crew still missing on burning ferry off Japan coast

Rescuers on Saturday launched an onboard search for a missing crew member after a fire broke out on a ferry off the coast of northern Japan prompting the evacuation of dozens of passengers, the coastguard said. Coastguard boats continued battling the blaze on the Sunflower Daisetsu after a distress call was made Friday evening as it was sailing about 55 kilometres (34 miles) off the coast of Hokkaido, Japan's northernmost island. "The fire has yet to be brought under control but the vessel remains stable while its location is unchanged offshore," a coastguard spokesman said. A total of 94 people were aboard -- 71 passengers and 23 crew members -- when the fire broke out on the 11,401-tonne ferry, said an official of MOL Ferry, which owns the vessel. All onboard, except one crew member, safely evacuated the ferry on lifeboats and were transferred to other vessels. The missing crew member was identified as Kunihiko Orita, a 44-year-old second officer, the MOL Ferry official said. View galleryPassengers from the burning Sunflower Daisetsu ferry … Passengers from the burning Sunflower Daisetsu ferry arriving at the ferry terminal at Tomakomai por … The coastguard spokesman said: "We sent six members of the special search and rescue unit to the ferry Saturday morning and they started searching for the officer on board." The Japanese coastguard has said flames were spotted coming from a truck aboard the ferry and that it was working to put out the blaze. It was not immediately clear how the fire broke out. http://news.yahoo.com/one-crew-still-missing-burning-ferry-off-japan-025908485.html

The "Sun Flower Daisetsu" issued a distress signal on July 31, 2015, at 5.32 p.m. off the coast of Honshu, reporting a fire on board. The fire started on a cargo deck in one of the trucks and got out of control off the coast of the northernmost island Hokkaido. The ferry with 71 passengers and 23 crew on board was en route from Tokyo to Tomakomai port, Hokkaido. She was about 30 miles off the eastern coast of Honshu. 15 patrol boats and 5 aircraft were sent to the Ferry. The passengers, all wearing lifejackets, were gathered on the deck, awaiting the arrival of rescue Teams. All passengers and crew were safely evacuated, no injures reported. One crew member went missing. There were about 160 vehicles on board, mostly trucks. Reports with photos: http://www.rt.com/news/311245-japan-ferry-fire-evacuation/ http://www.telegraph.co.uk/news/worldnews/asia/japan/11775829/Nearly-100-passengers-trapped-on-Japan-ferry-after-fire-breaks-out.html