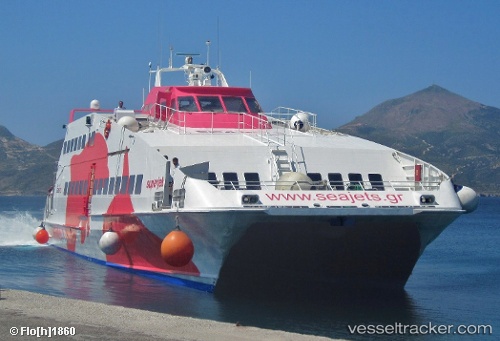 In the morning of April 4, 2022, the Port Authority of Syros was informed by the Captain of the 'Super Jet' that during the preparation for port adjustment for boarding to start the scheduled route Paros - Naxos - Heraklion - Heraklion Koufonisia - Katapola - Aegiali - Donoussa, a mechanical damage occurred. The departure of the ferry was prohibited by the Port Authority until the repair of the damage and the presentation of a class maintenance certificate by the classification society that monitors it. Th ship remained stationary in Ermoupolis as of April 5.

The 'Super Jet' suffered a fault on its port side engine on its scheduled service to Thira on Aug 9, 2020, at noon. The vessel was able to sail to the port of Thira, where its 278 passengers were safely disembarked. The port authority detained the vessel in port, to conduct repair works to the engine. Due to the unfavourable weather conditions, the vessel proceeded to a safe anchorage for the repair works.

The "Super Jet", while operating on its scheduled service from Sifnos to Piraeus, suffered damage to one of its four engines in the evening of Sep 7, 2019. The vessel, which was carrying 331 passengers, continued its voyage using its three other main engines at reduced speed and arrived safely in the port of Piraeus in the early morning of Sep 8. The Central Port Authority of Piraeus detained the vessel after its arrival in port, until the engine was repaired and a class maintenance certificate was issued. On Sep 9 at 7.30 a.m. the ship left the port again and berthed in Adamas Milos Port at 9.50 a.m.