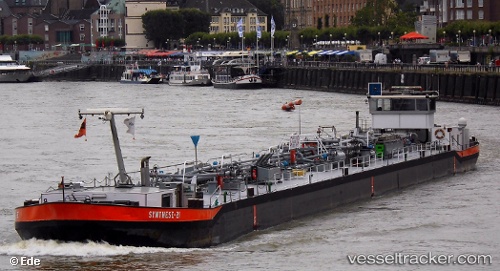 The 'Synthese' has been taken to the port of Haaften after the collision with a pillar of the railway bridge at Zaltbommel in the middle of the Waal and the damage was being surveyed by the maritime inspectorate. The 'Synthese 3', a tanker of the same shipping company took over part of the cargo after the Shipping Inspection of the Environment and Transport Inspection (ILT) gave permission for the transfer, just enough to pull the vessel smoothly out of the trap and to the port of Haaften, two kilometers downstream from the site of the accident, alongside the container barge 'Jacobus'. After the allision with the pillar, the tanker made a 180 degree turn and got stuck with the bow in the current. During the salvage work and the lihtering of the cargo, shipping was again hampered on the Waal until 2 p.m. when the container ship and the chemical tanker arrived at the port. Ships were in waiting positions up to Hurwenen and to Zuilichem. Around 2.30 p.m. the ship traffic was resumed. Dutch report with photos: https://www.bd.nl/bommelerwaard/tanker-die-spoorbrug-zaltbommel-ramde-is-deels-leeggepompt-en-ligt-in-haaften-voor-onderzoek~a41bf8a7/?referrer=https://www.google.com/

The 'Synthesis 21', 1710 ts (EU-No.: 04030280), allided with a pillar of the railway bridge over the Waal near Zaltbommel in the night of Dec 4, 2019. The raiway traffic between Utrecht and Den Bosch and the A2 motorway were barred after the accident, as was the river for shipping until damage investigations were carried out. The accident occurred in heavy fog. After several hours, the important land-side traffic routes were released again. The cargo of potassium hydroxin, a hazardous cargo, which was transported by the tanker, was to be ligherted onto another ship, the 'Synthese 3' (MMSI: 244660048), in the run of Dec 5. The damaged vessel was being stabilized by the Dutch barge 'Jacobus' (MMSI: 244650495) under the Martinus Nijhoff motorway bridge. The patrol boats 'RWS 42' and 'RWS 77' of Rijkswaterstatt secured the site. After daybreak, rail operator ProRail began to investigate the pillar which the ship had hit. The tough fog complicated the investigations. Dutch reports with photos: https://www.omroepgelderland.nl/nieuws/2431744/Geen-schade-aan-spoorbrug-Zaltbommel-na-botsing-met-tanker https://www.destentor.nl/binnenland/tanker-botst-tegen-spoorbrug-in-zaltbommel-hulpdiensten-voorkomen-verkeersinfarct-op-a2~a082ce8c/