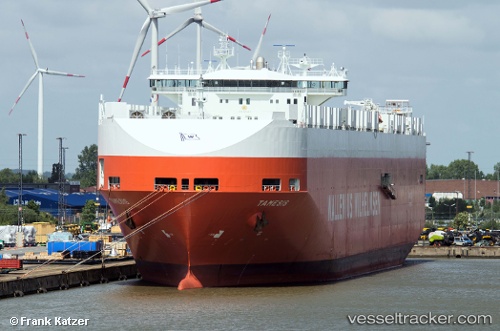 The US Coast Guard, the 'Umberty' and the 'Tamesis' assisted a 78-year-old man aboard the s/y 'Mayfly' after he repeatedly ran out of supplies during a five-month journey across the Pacific Ocean. On Oct 29, 2019, the brother of the mariner notified Coast Guard District 11 command center watchstanders that his brother departed Japan at the end of May and was expected to arrive in San Francisco in late August. Due to a lack of wind, the man aboard the sailing vessel was delayed by two months, depleting his food and water supply. District watchstanders requested assistance from a nearby Automated Mutual-Assistance Vessel Rescue System vessel, the 'Tamesis', to provide rations to the distressed mariner. The 'Tamesis' arrived on scene and delivered the rations with no request for additional assistance. On Nov 4, district watchstanders received a request for food and water from the mariner who was also experiencing heavy weather approximately 250 miles west of Los Angeles. A nearby AMVER vessel, the 'Umberty', diverted and transferred additional rations. On Nov 13, district watchstanders notified Coast Guard Sector Los Angeles-Long Beach watchstanders that the mariner was approximately 85 miles southwest of Point Vicente, low on supplies again, and requesting assistance with towing the sailboat. The Coast Guard Cutter 'Robert Ward' was diverted from its patrol to tow the homemade vessel towards Oxnard. At approximately 3:30 a.m. on Nov 14, the 'Robert Ward' transferred the tow to a Coast Guard Station Channel Islands Harbor crew. The crew aboard the 45-foot Response Boat-Medium towed the vessel to Station Channel Islands Harbor.´ Report with photo: https://coastguardnews.com/coast-guard-assists-mariner-aboard-homemade-vessel-after-5-month-journey-across-pacific-ocean/2019/11/14/