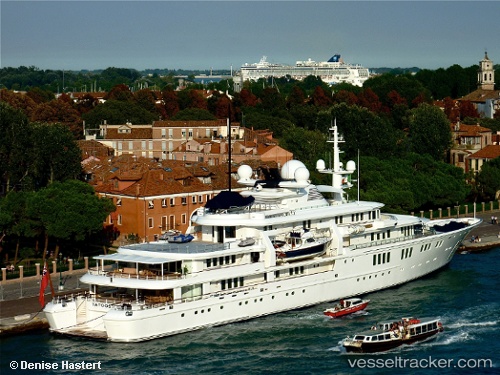 Microsoft billionaire Paul Allen is combating allegations by the Cayman Islands that his superyacht, the 300-ft MV Tatoosh, destroyed 14,000 square feet of coral reef while anchored off of Grand Cayman in January. The Cayman Islands Department of the Environment alleges that the yacht's dragging anchor chain did the damage, impacting up to 80% of the coral in the area. But Allen does not agree about the extent of his responsibility. There appear to be differences between the plans the Department of the Environment and Allen have for restoring the coral, too. In a statement released by his company, Vulcan Inc., Allen and his spokespeople note that they have hired coral restoration experts to assess the situation, and submitted a remediation plan to the local government earlier this month. "We took this step even though extensive past and recent damage to this same reef, as a result of other incidents that were not remediated, makes it difficult to determine what, if any, actual damage was caused by the Tatoosh," the statement says. Allen's team contends that the Tatoosh was moored off of a popular dive site in a position "explicitly directed by the local Port Authority." Upon learning of potential anchor chain issues, the crew relocated the yacht — but not, according to the government, before the harm was done. http://www.starfl.com/article/ZZ/20160223/BUSINESS/302239928/-1/s

The billionaire Paul Allen was being blamed for wrecking a protected reef in the Cayman Islands. The anchor chain of the "Tatoosh" destroyed 14,000-square-feet of reef in the West Bay replenishment zone - roughly 80 per cent of the coral that's vital to marine life. Local divers conducted a survey of the damage last week and officials plan to release the findings of the dive next week. It was unclear when the damage to the reef was done, but Allen's yacht was in the islands last week. An investigation was ongoing into what caused the "Tatoosh" to destroy such a large part of the reef. She was anchored close to the "Doc Poulson" wreck and The Knife dive site when it did the damage. A spokesman for Allen pitted the blame on the Port Authority, saying the crew were simply following officials' instructions on where to place the vessel. When the winds changed direction and pushed the yacht closer to the reserve, they say they moved it.

The Tatoosh yacht owned by Paul Allen, the co-founder of Microsoft, has come to port Sochi. As the Port Authority informed, the yacht has moored at the berths of port Imeretinsky.