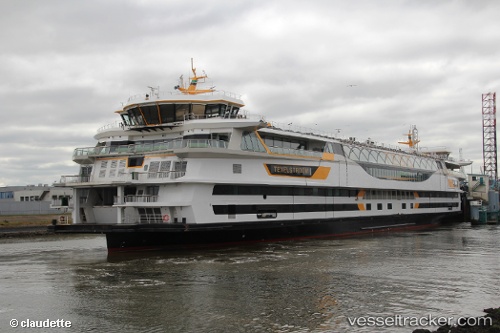 The "Dokter Wagemaker" was inserted by ferry operator TESO this week while tests were carried out with the "Texelstroom". This decision was made after a number of technical failures of the ship since the return from the yard on Feb 9. More echnical problems have occurred since Feb 13 which led to short-term disruptions. On Feb 18 at 4.30 p.m. the ferry suffered another malfunction and arrived at Texel with some delay after 5 p.m. after which it was decided to have the schedule run by the "Dokter Wagemaker" starting at 6 p.m. This week TESO was going to run tests with the "Texelstroom" to address the cause of the problem.

In the afternoon of Jan 14, 2017, the "Texelstroom" allided with a jetty at the so-called Pepper House in Den Helder after the ship suffered a technical failure and became unmanoeverable, but escaped without major damage. The jetty suffered significant damage. The ferry had suffered a technical failure in the control when entering port. Therefore, one of the four rudder propellers failed, the ship came perpendicular to the jetty and hit it. The crew regained control by using he emergency system. Then the "Texelstroom" could be bertheds with the three remaining rudder propellers. After resetting the equipment the problem no longer occured. But on Jan 15 at 7 p.m. the ferry was again hit by a technical snag in the steering. The Spanish system supplier was called to investigate the cause of the trouble. The "Schulpengat" was inserted as a replacement ferry after the "Texelstroom" was sidelined in Texel. In the meantime, operator Teso already looked online for possible causes of the technical defect. Repairs are covered during the warranty period of one year. It was hoped to have the "Texelstroom" back in service on Jan 18 as the "Schulpengat" had a capacity of 240 vehicles, 100 less, so that waiting times could not be avoided. Dutch report with photo and video: http://www.texelsecourant.nl/nieuws/algemeen/26613/beelden-van-texelstroom-die-steiger-ramt http://www.texelsecourant.nl/nieuws/algemeen/26598/texelstroom-ramt-steiger-

JRC and Alphatron Marine has announced the delivery of the AlphaBridge on the double ended passenger ferry Texelstroom built at La Naval Shipyard in Bilbao, Spain. The fully integrated and ergonomically designed bridge features full navigation, (internal) communication and observation equipment, captain’s chairs on sliding rails with steering control built in the armrest and various workstations, with the exact same equipment installed on both ends of the vessel. The vessel, owned by Dutch company Texels Eigen Stoomboot Onderneming (TESO) will be sailing between the city Den Helder on the mainland and the West Frisian island of Texel, situated in the North Sea off the Dutch coast, along the edge of the Wadden Sea. Besides building a sustainable, environmentally friendly vessel, one of the most important objectives is continuity, safety and reliability. In every aspect, the AlphaBridge fits perfectly within this philosophy as it lies in the very foundation of our company.