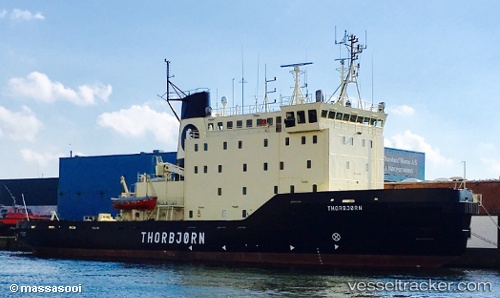 The State icebreaker "Thorbjørn" which has been idle in Frederikshavn since 1996, has been sold to Nordane in Svendborg and towed to Petersen & Sørensen Yard in Svendborg for overhauls which were scheduled to be completed in January 2016 before being offered to the market for breaking ice in Finland or Greenland as well as towing or surveying operations.

Three Danish icebreakers Danbjørn, Isbjørn and Thorbjørn may soon be home ported in Hobart, Australia, and headed for service in Antarctica. The Australian Maritime College and the Adelaide Nautical College & College On Murray are hoping to buy the vessels. While the Australian government has decided to build a new icebreaker to work in the South Pacific and Antarctica, these vessels are hoped to bridge the gap until the new icebreaker enters operation in around five years. The plan is for the Adelaide Nautical College to use the vessels to provide support to emergency response, search and rescue operations as well as assist in combating pollution at sea. The three ice breakers are currently based in Frederikshavn in Denmark. They have not been in service for over 15 years, but they have had a permanent skeleton crew assigned to take care of them. The diesel-electric, 67m Thorbjørn was built in 1980 and has only seen around 300 days of active icebreaking during its entire service life. The vessel is equipped with a towing winch and stern notch designed to receive and hold the bow of another ship by the towing line, making it possible to tow a vessel up close through difficult ice conditions. Thorbjørn is equipped with a Wärtsilä air bubbling system which reduces the friction between the hull and ice or snow by hull lubrication, thus improving its icebreaking capabilities. The sale is expected to be completed later this year.

In the evening of Dec 2, 2012, a fire broke out aboard the "Thorbjørn" in a boiler of the ship which was docked at Frederikshavn. Smoke divers were sent into the icebreaker, and they quickly located the origin of smoke which emerged from the ship's boilers. Engineers from the Naval Station investigated the fire area further. The ship was without crew at the time of the fire, but there was a lot of smoke damage, and also the electrical net was damaged.