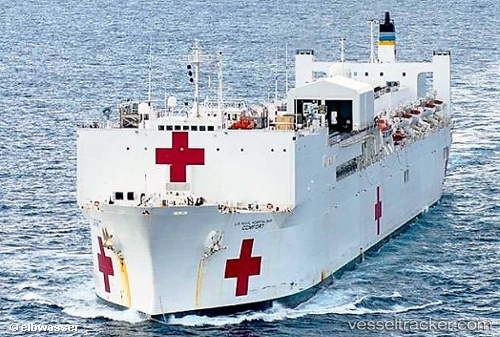 Sailors leaving ship to be quarantined

The USNS 'Comfort' on May 2 berthed at to Pier 12 at the Naval Station in Norfolk after it spent the last month in New York City, serving as an overflow hospital as the city battles an expansive coronavirus outbreak that has left more than 13,000 there dead. The ship arrived in the early morning after spending May 1 moored just outside Hampton Roads Harbor while the ship was disinfected and the crew tested for the virus. The ship treated 182 patients while in New York, about 70% of whom were highly acute coronavirus patients. It was the busiest ICU in the Department of Defense over the past month. The ship had 25 patients on ventilators and cases with multiple organ failure, necessitating a lot of one-on-one attention from the ship’s medical staff. Many of the nearly 1,200 sailors returning on the Comfort may not even be going directly home after they disembarked. Every sailor leaving the ship will spend the next 14 days under quarantine based on guidelines from the Centers for Disease Control, including having their own room in which to sleep and maintain appropriate social distancing. Some can abide by those guidelines at home, while those who can’t will be put up in a hotel or barracks by the Navy for 14 days, at the end of which they will be tested again.

Hospital ship returns to its base

On April 30, the USNS 'Comfort' left New York bound to its Norfolk base, but was ready for future coronavirus efforts. When the ship arrived in New York on March 30, the pandemic ravaged the city at its worst. Nearly 2,000 coronavirus patients sought emergency care daily and about 800 died every day. Initially, USNS Comfort, which has 1,000 beds, was supposed to relieve the medical care by receiving non-coronavirus-related cases. But after a week, New York Governor Andrew Cuomo asked that it also receive Covid-19 patients, but activity has been low on board in recent weeks. At a meeting at the White House last week, Cuomo informed the president that the ship's hospital was no longer needed.

All patients on the USNS 'Comfort' have been discharged as of April 26 after the final patient had left the Navy ship which had treated 182 patients after being deployed to New York initially to handle hospital overflow and later designated to treat coronavirus patients. The Javits Center, which was converted into a medical treatment center in the epicenter for the virus in the United States, was still treating about 84 patients. The crew will remain on the ship for several days to disinfect and clean the vessel in addition to stowing medical equipment and preparing the ship's engine before departing. Upon returning to its home port at the U.S. Naval Station Norfolk in Virginia, the ship is expected to undergo maintenance and restock for its next mission.