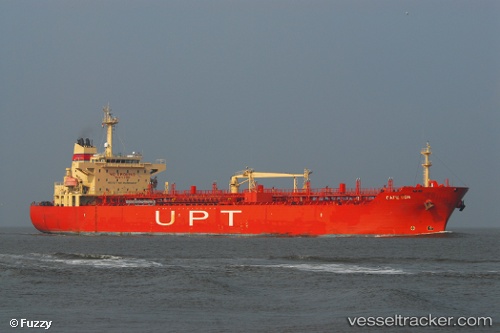 sold for $ 9.5m to Middle Eastern buyers (on subs)

The "Cape Bon" left the port of Dunkerque after repairs on Dec 24 at 7.30 p.m. and headed to Wandelaar, ETA Dec 25, 3 a.m. The ship dropped anchor on Westhinder anchorage in the early morning.

Following a fire in an electrical switchboard, the "Cape Bon" suffered a blackout on Dec 19, 2016, coming from Le Havre and being 18 km off Calais. The tanker was carrying 32,200 tonnes of flammable liquid. The Maritime Prefecture of the Channel and the North Sea led the long and delicate rescue operation, which ended on Dec 20. At approximately 3:30 p.m. on Dec 19, the CROSS Gris-Nez informed the Maritime Prefecture that the tanker was disabled. The Center for Maritime Operations deployed the emergency tug "Abeille Languedoc" from Boulogne-sur-Mer to assist. When she arrived at 5.50 p.m., the tanker crew had dropped anchor. At around 7 p.m., a Dauphin helicopter, based in Le Touquet, took off with an evaluation and response team of the Ship Safety Center on board. After several hours of investigation, the team decided that the vessel had to be taken in tow. The shipowner was given formal notice by the Maritime Prefect and entered into a commercial towing contract with the company Multraship a tug of whom was not expected to arrive in the area before Dec 20 at noon. Throughout the night, the "Abeille Languedoc" remained on standby near the tanker, ready to intervene. On Dec 20 around 10 a.m., the tug "Multratug 20" arrived in the area. At 2 p.m., in the absence of new information, the Maritime Prefect decided to engage a helicopter in order to transfer two sailors from the "Abeille Languedoc" and the patrol boat "Escaut" of the maritime gendarmerie on board to supervise the towing operation. At 3:10 p.m., the "Multratug 20" established a towing connection to the "Cape Bon". The convoy was escorted by the "Abeille Languedoc" and the "Escaut" to the Dyck area where the tanker dropped anchor at 5.30 p.m. before entering the port of Dunkerque. French report with photos: http://france3-regions.francetvinfo.fr/nord-pas-de-calais/cote-opale/pas-calais/calais/chimiquier-rempli-liquide-inflammable-secouru-au-large-calais-1159315.html