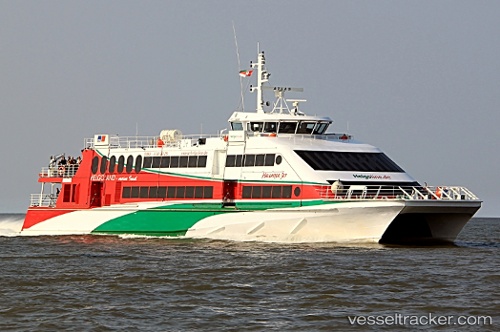 The "Halunder Jet“ could not be loaded onto the heavy load carrier "Palabora" at the Ems Quay in Emden on Nov 14, 2017, as planned. The operation had to be postponed due to strong wind. On Nov 15 another attempt started. Within nine hours two cranes lifted the ship onto the freighter. The "Halunder Jet", which carried passengers from Hamburg via Wedel and Cuxhaven to Heligoland, is to be carried to Canada within 32 days to operate between Vancouver and Victoria in the future. German reports with photos and video: https://www.youtube.com/watch?v=urQ-RGRZ8Hg&feature=youtu.be https://www.cn-online.de/stadt-land/news/helgolandfaehre-wird-nach-kanada-verschifft.html https://www.shz.de/lokales/pinneberger-tageblatt/abschied-vom-halunder-jet-selbstvertrauen-und-zuversicht-fahrerflucht-in-quickborn-id18324031.html

Clipper is to launch a new passenger ferry service between downtown Vancouver and Victoria in Canada in spring 2018. The Canadian operator will offer the service on a 52-metre, high-speed catamaran, Halunder Jet, from its parent company, FRS. Currently operating in the North Sea, the 579-passenger ferry was custom built for FRS’ operations between Hamburg and Heligoland. The vessel has operated in difficult sea conditions similar to the Salish Sea and uses a motion dampening system to help consistently deliver a comfortable ride for customers. Halunder Jet will be retrofitted to Clipper’s specifications and reflagged for its new operation ahead of the spring 2018 launch. http://www.cruiseandferry.net/articles/clipper-to-launch-vancouver-to-victoria-ferry-service-in-2018#.WNDkgvnNy9I

A ruptured fuel line has forced the "Halunder Jet" on Wednesday afternoon (July 18, 2012) to return to Cuxhaven. The catamaran was with about 500 people on board en route to Helgoland, as a leaking fuel line led to heavy smoke to an exhaust pipe. Immediately, the captain was headed back towards "Alte Liebe " jetty in Cuxhaven, where crew members and passengers were evacuated. Forces of the Fire Department took down parts of a fuel-soaked insulation and got the situation under control.