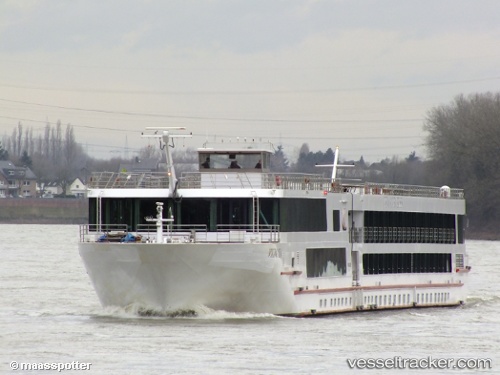 Viking Sun ran aground on French Rhine side

The "Viking Sun" suffered engine damage at Strasbourg on the Rhine in the morning of Nov 12, 2013, and ran aground on a gravel bank off the Eruopa Bridge at 5.25 a.m. The ship got stuck on the French side of the river. It was secured with a rope which was connected at a tree on the river shore. The tug "Rhône" from Strasbourg was soon on site but unable to operate as long as the passengers were still on board and it was unclear whether the rudder had suffered damage. The 200 passengers from England and the USA and 40 crew had to be disembarked by the "La Bohème" with homeport Strasbourg of Croisi Europe, which came from Breisach and went alongside at 10.20 a.m. They were taken further to Kehl with coaches. A container barge dragged the disabled cruise ship off the ground, so that it could enter the port of Kehl with own power at 2 p.m. The fire boat "Europa 1" was on scene with a team of the fire rescue Kehl. Divers were called from Koblenz to Survey the hull and found damages suffered in the allision with pilings south of Strasbourg in October. German report with photos: http://www.badische-zeitung.de/kehl/pannenschiff-laeuft-auf-grund-zweiter-zwischenfall-binnen-kurzer-zeit--77111778.html

Damage to be repaired in the Netherlands

The "Viking Sun" was severely damaged in the allision accident at the quarry of Gerstheim on Oct 1 at 3.45 a.m. The ship was mastered by a young woman of 25 who was still in training. But at the beginning of a curve of the Rhine, she made a wrong move and disconnected the autopilot. The vessel ran into a dolphin, a steel pole where barges are being to dock before loading gravel at Gerstheim. The pole were bent down, and the hull was badly damaged, however, only above the waterline, divers found out. The owners Viking River Cruises had called the fire department of the Rhine, who in turn alerted their French counterparts who sent a dozen firefighters, including a dive team. No injuries had been reported, but the master was very shocked. For the company Est Granulats, which is dealing with the gravel, the damage is significant too. At first it was thought that only the guardrail and the bridge were damaged , but it turned out that also the loaders were affected. The structure has moved several centimetres. It will take weeks or months to disassemble and reassemble everything, and there was no other place to load ships. The damage could amount some 100000 Euros. After complex scenarios were considered to release the ship - raising the level of the Rhine or to use a cutting torch to remove the pole still stuck in the hull - the ship was finally released by filling tanks with ballast water so that it got the permission to sail to Kehl at 6.30 p.m. before proceeding to a repair yard in the Netherlands. French reports with photos and video: http://www.dna.fr/edition-de-strasbourg-erstein/2013/10/01/la-croisiere-s-arrete http://alsace.france3.fr/2013/10/01/gerstheim-un-bateau-encastre-dans-un-ponton-236-passagers-et-membres-d-equipage-bord-328865.html http://lci.tf1.fr/france/faits-divers/un-bateau-de-croisiere-s-encastre-dans-un-ponton-sur-le-rhin-8279350.html

The "Viking Sun" in the night of Oct 1, 2013 at 4.30 a.m. allided with three bollards of a pontoon used to moor barges on the Rhine at Gerstheim. The 236 occupants were not injured and were transferred onto another ship around 1:30 p.m. and taken to Kehl. There were 189 passengers and 47 crew on board. The passengers were 73 Britons,106 Americans and 10 Canadians, mostly seniors. They were accomodated in a hotel in Baden Baden. Some went on to Amsterdam by bus, while others immediately ended their journey. According to preliminary investigation, the accident was caused by human error. The impact tore a breach of about three meters length and 0,5 metres width into the port side foreship above the water line, while there was no water ingress, the vessel could be immobilized for several days. It was towed to th lock Gerstheim at 4 p.m for further investigations. French reports with photos: http://www.francebleu.fr/faits-divers/bateau/accident-de-bateau-sur-le-rhin-gerstheim-893002 http://www.dna.fr/actualite/2013/10/01/un-bateau-encastre-dans-un-ponton-plus-de-200-personnes-a-bord http://www.lalsace.fr/bas-rhin/2013/10/02/un-bateau-s-encastre-dans-un-ponton-pas-de-blesse http://fr.canoe.ca/voyages/nouvelles/archives/2013/10/20131001-154308.html http://www.dna.fr/actualite/2013/10/01/un-bateau-encastre-dans-un-ponton-plus-de-200-personnes-a-bord http://www.planet.fr/societe-strasbourg-un-bateau-sencastre-dans-un-ponton-sur-le-rhin.465134.29336.html