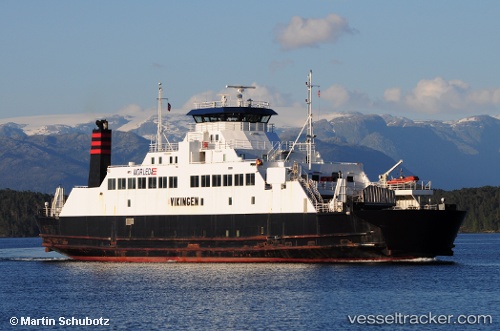 In the afternoon of Nov 26, 2016, the "Vikingen", enroute from Ranavik to Skjersholmane, suffered engine trouble on the Bømla Fjord. The main engine had to be turned off after several alarms were raised, and the ship went adrift off Eldøyane in favourable weather conditions for a while before getting tug assistance. At 3.15 p.m. the ferry was towed into the port of Skjersholmane where passengers and cars could be disembarked before the ship was taken to a repair yard. The "Hardingen" which was berthed in Sunde was called in as a replacement ferry. Norwegian report with photo: http://www.sunnhordland.no/nyhende/vart-slept-inn-til-skjersholmane-1.2200487

Ferry pulled off and towed to dock

The "Vikingen" which ran aground at Årsnes following an engine failure in Ytra Hardanger on Jan 10 around noon, was pulled off at 4.30 p.m. by the tug "Eide Wrestler" and the Coast Guard cutter "Njord" and towed to the ferry dock. At 6.30 p.m. all cars have been driven off the ferry. A diver carried out a hull survey with assistance from the Coast Guard in order to find out if the ship could proceed directly to the yard in Halsnøy or first had to be repaired on site. There were no indications there was a leak in the hull. During the salvage attempt by the ferry "Hordaland" a railing was bent.In spite of the dense smoke from the engine there was no fire, and investigators could not see anything abnormal in the engine room, so the motor must be taken apart to find the cause. The ferry had a crew on a six people and 34 passengers on board when it went aground. The passengers were taken to the Rosendal Fjord Hotel. The ferry "Stallovarre" was called to serve the route Årsnes-Varaldsøy-Gjermundshamn as soon hoas she has arrived from Stavanger which was expected to be until Jan 12. Norwegian report with photos: http://grenda.no/ferja-er-komen-laus/ http://www.ba.no/nyheter/steike-meg-der-rok-slepetauet/s/5-8-249681 http://www.bt.no/nyheter/lokalt/Ordforar-kallar-inn-til-krisemote-etter-ferjetrobbel-3519129.html

The "Vikingen" ran aground at Årsnes following an engine failure in Ytra Hardanger on Jan 10, 2016, at 11.55 a.m. There was a lot of smoke and poor air immediately after the ferry ran onto the breakwater, causing a panic among the passengers, but then it calmed down. 40 people, among them 34 passengers, have been evacuated. They had stayed in the lounge after the accident. The ferry runs on the route Årsnes - Varaldsøy - Gjermundshavn in Ytre Hardanger. A tug reached the ferry around 3 p.m. A first attempt to pull the ferry off by the ferry "Hordaland" had previously failed. The ship was stable on the ground and had no leak. Norwegian report with photo: http://www.aftenposten.no/nyheter/iriks/40-personer-evakuert-fra-grunnstotte-ferge-8312265.html http://www.ba.no/nyheter/steike-meg-der-rok-slepetauet/s/5-8-249681 http://grenda.no/ferje-pa-grunn-ved-arsnes/ http://www.hardanger-folkeblad.no/ferje-med-problemer-ved-arsnes/s/5-22-32621