VISION OF THE SEAS 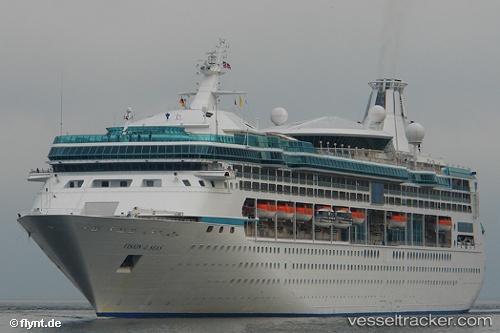 The 'Vision of the Seas', holding 345 Trinidad nationals on board, docked in St Lucia in the morning of May 25, 2020. 72 St Lucians disembarked and entered five buses, where they were taken home to quarantine. They had their temperatures taken before. Apart from the 345 TT nationals on the 'Vision of the Seas', there were about 20 others on three other Royal Caribbean vessels, including the 'Serenade of the Seas' and the 'Majesty of the Seas'. They will all board the 'Vision of the Seas', sail to Port of Spain and dock, once cleared by the Ministry of National Security. Apart from the captain and a few others, the TT nationals will be the last to return home. It remained unclear when the Ministry of National Security will begin allowing the cruise workers in groups and in what order. The Office of the Prime Minister announced on May 22 it had, Granted approval for the arrival of over 1,000 Jamaican ship workers aboard the 'Adventure of the Seas'. Ship workers who test positive will be placed in state quarantine for 14 days and those who test negative will be allowed to home quarantine for the same period. Holness said the over 1,000 ship workers will be allowed off the ship in groups of 200, directed by the health authorities. The six nationals from the 'Caribbean Princess', along with 52 more, who returned to Port of Spain on Disney Cruise Line life boats in the morning of May 25, were taken by police escort to the facility in South, where they were examined and will undergo yet another two-week quarantine. The vessel left St Lucia on May 25 and was scheduled to stop in St Vincent on May 29.

85 Haitian citizens working on board the 'Adventure of the Sea' and 'Vision of the Seas' have landed in the Port of Labadee without the Government of Haiti requesting that they undergo tests to determine if they were infected with Covid-19. The repatriation by Royal Caribbean was the result of weeks of negotiations with the Haitian government, which closed all borders after registering its first coronavirus cases on March 19. Royal Caribbean assured that the crew members were healthy and were in a quarantine period of a minimum of 14 days on the ships, however, none of them were subjected to coronavirus examinations. Haiti's protocol currently requires that all returning citizens be quarantined at their own expense for 14 days, and that they provide evidence that they have tested negative for Covid-19 before they are allowed to return. Because the country did not require cruise ship workers to undergo tests to detect the virus, Ernst Robert Jasmin, director of the ministry of health for northern Haiti, said that the crew members of the passenger ships were more than 40 days confined on board the ship under medical supervision. Each one has a medical certificate, but the health teams of the regional and port authority carried out the usual controls at the reception - which consists of taking the temperature - and collected the contact details of each passenger while reminding them of the instructions of prevention.