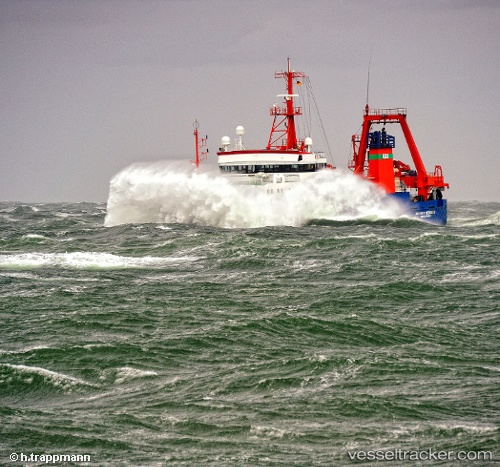 During a research voyage off Greenland the 'Walther Herwig III' was called to assist a Greenland flagged tug towing a barge, which was distressed with a crew of three on board and drifting towards the coast on Oct 21, 2020. The ship was reached within 12 hours and could be taken in tow. After a voyage of 42 hours the convoy reached Qaqortoq on Oct 23.

Leisure boat was pushed against research vessel in Kiel

On May 4, 2017, at 3.45 p.m. the leisure boat "Renate" suffered engine failure when leaving the locks of the Kiel Canal in Kiel-Holtenau. Due to the strong wind the boat drifted towards the cargo m/v "Barbarossa" (IMO-No.: 9197765), the crew of which tried to pass a rope to the "Renate". The boat drifted away again and slammed against the bow of the "Walther Herwig III", which was underway towards the Baltic Sea coming from Bremerhaven. A sailing yacht which had already left the lock, turned around and managed to pull the "Renate" free and out of the lock towards the Tiessen Quay at 4.05 p.m. German report with photos: http://forum-schiff.de/phpBB3/viewtopic.php?f=2&t=23&p=136336#p136336

The German Federal Office for Agriculture and Food (Bundesanstalt für Landwirtschaft und Ernährung, BLE) has signed a contract with DAMEN Shipyards Group for the construction of a Fisheries Research Vessel, the company said in its press release. The contract followed the successful result of a European tendering process, realized by the Federal Waterways Engineering and Research Institute (Bundesanstalt für Wasserbau, BAW). With the vessel, to be called the Walther Herwig, the German Federal Ministry for Food and Agriculture (BMEL) will support Germany’s fisheries and oceanographic research programmes. To this end, DAMEN will construct the Walther Herwig to the highest levels of scientific and environmental standards. Measuring 85 x 17,40 metres, the Walther Herwig will be the largest vessel in the German Federal Ministry of Food and Agriculture’s fleet. Such dimensions will allow for accommodation for 26 crew and 26 scientists. In terms of scientific facilities and equipment, the vessel will be outfitted with two hangars, wet and dry laboratory areas and trawling gear for both demersal and pelagic fisheries research. For physical and biological oceanographic studies, the vessel’s scientific teams will be able to utilise winches capable of relaying equipment to depths of up to 6,000 metres. Talking at this morning’s contract signing ceremony at the BLE office in Hamburg, DAMEN Commercial Director North, West & South Europe Frank de Lange commented: “We are proud to have been awarded this prestigious contract for such an advanced research vessel. We are looking forward to continuing our close cooperation with representatives from the German Federal Office for Agriculture and Food during the construction process.” The Walther Herwig will be built at DAMEN Shipyards Galati in Romania to a design that has been finalised in cooperation with Norwegian ship designers Skipsteknisk. The expected delivery is January 2020.