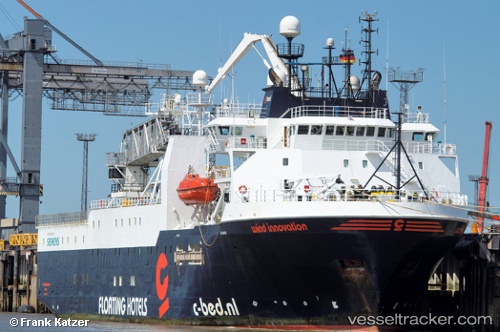 C-Bed is converting the "Veritas Viking II" for use as a hotel vessel. It has contracted Wärtsilä Ship Design to supply the design for the rebuild. When completed, the rebuilt ship will be used to accommodate and transfer service personnel working on offshore wind farms. The rebuild project is being carried out at the Fayard AS shipyard in Denmark and is expected to be completed during the first quarter of 2016. The contract with Wärtsilä was signed in September. Wärtsilä provided the original designs for the "Viking II", then "Veritas Viking II", which was delivered in 1999 to Eidesvik in Norway. After the current conversion, the vessel will be named "Wind Innovation". After the conversion, the vessel will have accommodations and hotel facilities for 125 people and will feature a heave compensated gangway. It will fullfil the requirements for Special Purpose Ships.

Oslo-listed Eidesvik Shipping, part of of Eidesvik Offshore, has signed a memorandum of agreement with an unnamed buyer for the sale of its seismic survey vessel VIKING II (4,410 dwt, built 1999). A price for the ship (pictured) was not disclosed, but the company said the sale was done close to the book value of the vessel. VIKING II will be delivered to the buyer in the third or fourth quarter this year, Eidesvik said. The Norway-built survey vessel is equipped with integrated geophysical and navigation data acquisition systems, onboard data processing and quality assurance capabilities, according to the company’s website.

Vietnamese authorities are furious after a Chinese fishing boat sabotaged exploration equipment to the "Viking II", which was hired to search for oil in South China Sea. The incident occurred about 160 nautical miles off the coast of South Vietnam, which is well within its exclusive economic zone, according to a spokesman for the Vietnamese authorities. In Hanoi hundreds of people protested this week in protest against the "harassment" of Vietnamese ships in the South China Sea. Though a Vietnamese coast guard vessel had raised a warning flag, an f/v with the number 6226 maneuvered so close to the "Viking II" that it cut off parts of the exploration equipment when crossing in front of the bow of the "Viking II". Exploration cables to "Viking II" became entangled in cables of the f/v which damaged its propeller. China was demanded to stop such actions immediately, and Vietnam is going to require financial compensation for the damage.