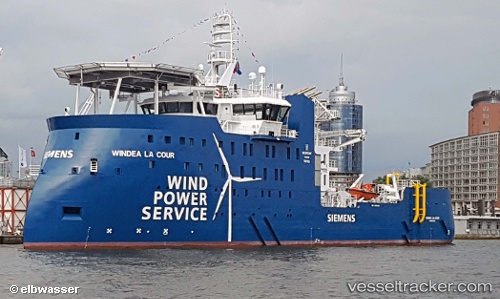 The Offshore Renewables Award is awarded to a company, project or product that has made a significant contribution to the development of the offshore renewables market during 2016. The 'Windea La Cour' was nominated, and eventually won, the award, much due to its X-STERN aft hull. It is an optimised hull for wind farm operations, as the operator avoids loosing time by turning the vessel and moving slowly backwards. Reports show that vessels servicing the offshore wind turbines operate backwards at least 50-70 per cent of the time after having arrived at the wind farms. The video below was shot at the vessel's sea trial, where the backing abilities were tested. The vessel was delivered in 2016, and is in service at the 600 MW Gemini offshore wind power plant in the Netherlands.

The godmother Sophie Schulte named the first wind farm service vessel of the Hamburg based shipping company Bernhard Schulte and Beijing based ICBC Leasing “WINDEA LA COUR”. Poul la Cour was a Danish meteorologist and innovator for wind turbines. Starting from summer the vessel will work at the Gemini wind farm in the Netherlands for Siemens Wind Power Service to ensure the production of green energy from 150 wind turbines. turbine.”The vessel is the first of two SOVs built at Ulstein Verft in Norway, which Bernhard Schulte Offshore will deliver to Siemens. Both vessels are co-owned with a Chinese company. Ian Beveridge, CEO of Bernhard Schulte, said: “We are glad to extend our long relationship with ICBC Leasing by ajoint venture to provide service to Siemens, which was initiated at the Chinese-German trade conference lead by Li Keqiang and Angela Merkel in 2014. Main particulars of the vessel: Length 88m, breadth 18 m, speed 13.5 knots, accommodation for 60 people and equipped with a motion compensated gangway system (Uptime) to transfer technicians to the wind turbine.

When Bernhard Schulte Offshore (BS Offshore) and their client Siemens ordered a service operation vessel from Ulstein Verft in 2015, they saw the benefit of having the ship designer and the yard in one place. The vessel is now completed, and was delivered on 23 June 2016. “We considered several yards worldwide, but Ulstein Verft was our final choice. We saw the benefit of having the designer and the yard in one place. Ulstein has the same approach as us – always going the extra mile to delight the final customer,” says Matthias Müller, Managing Director at Bernhard Schulte Offshore GmbH. “Together, we have developed a flexible and effective ship solution for the offshore wind service market,” says Tore Ulstein, deputy CEO and Head of Market & Innovations in Ulstein Group. “The project process has been very smooth, and the combination of expertise in our companies has led to fruitful discussions. We are happy to deliver, on schedule, this state-of-the-art SOV vessel, and are certain that she will serve BS Offshore and Siemens in a most satisfactorily way.” http://www.hellenicshippingnews.com/ulstein-delivers-flexible-vessel-for-the-offshore-wind-service-industry-to-bs-offshore/