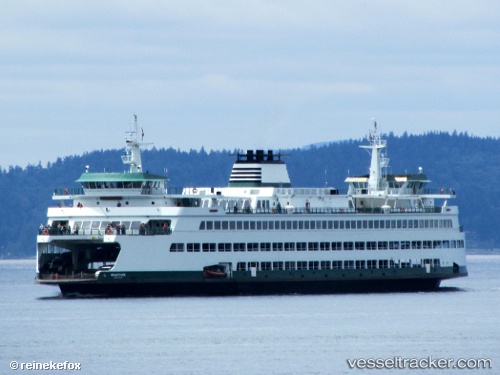 On July 4, 2016, the "Wenatchee" had to be pulled out of the Seattle-Bainbridge Island for an inspection after sbe made a hard landing at Colman Dock at about 8 a.m. while pulling into Seattle. She could not return to service until it was inspected by the Coast Guard. Four sailings were canceled while the vessel was inspected. No significant damage was found and the boat was returned to service. The dock was also damaged, but it didn't need to close. No one was injured in the hard landing. The 8:45 a.m. and 10:25 a.m. sailings from Bainbridge were cancelled, along with the 9:35 a.m. and 11:25 a.m. sailings from Seattle. The "Wenatchee" returned to service with the 12:20 p.m. sailing from Bainbridge Island.

The "Wenatchee" was towed to a Vancouver dry dock on July 28, 2014, after a commute, where it was having a stern tube replaced. The ferry was expected back sooner than expected. Repairs were made on July 31, the ferry was then to be refloated and depart on the high tide at about 9 p.m., go through customs in Anacortes and join the Kingston-Edmonds route in the afternoon of Aug 1.

The Seattle-Bainbridge ferry Wenatchee will be out of service for repairs to the stern tube seals for about a week beginning July 30. This work was originally scheduled to begin Tuesday, but was delayed because a dry dock wasn’t available. With two other vessels out for repair or maintenance, there will be no appropriate backup vessel to replace the Wenatchee. Washington State Ferries will reactivate the recently retired Evergreen State for one week and shift vessels throughout the system. A specific service plan will be announced next week. The Wenatchee will travel to Vancouver, British Columbia, the nearest available dry dock that can handle a ship of its size. Crews continue to closely monitor the Wenatchee’s stern tube and have not seen any oil leaks. If oil is leaking WSF will immediately remove the ferry from service Read more: http://www.kitsapsun.com/news/2014/jul/18/ferry-wenatchee-repairs-pushed-back-a-week/#ixzz37titAu00 Follow us: @KitsapSun on Twitter | KitsapNews on Facebook